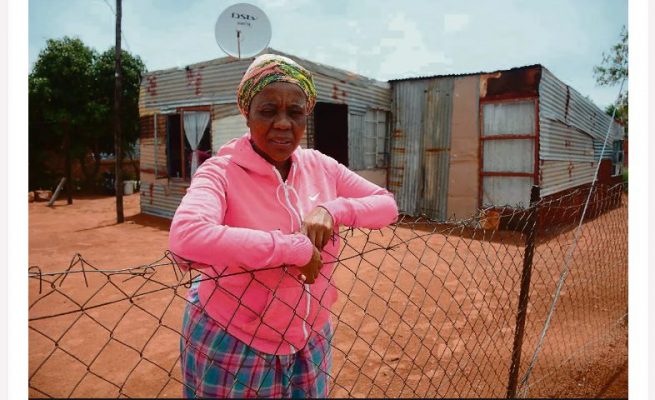 ABYCIA Moutlana and her ex-boyfriend broke up two years ago.

But they’re apparently still sharing a shack and they sleep in different rooms.

However, Abycia is unhappy that her ex has been demanding se_x from her as payment for rent, despite the fact that they built the shack together.

The 48-year-old from Itsoseng in Mabopane, Tshwane, said the demands being made by ex-boyfriend, Oscar Maphaha (51), were hurting her.

“He says he wants me to leave because he wants his new woman to move in,” she said.

Abycia claimed Oscar even threatened her with death.

“Two weeks ago he threatened me with a spade and I ran for my life to my friend’s place.

“When I came back I told him to try it again, but he did nothing.

“I don’t want to leave my home because we built it together.”

Abycia said she would not let another woman take what she’d been working for since 2006.

She said the furniture in the shack belonged to her.

She claimed her ex-boyfriend was jealous of her job and wanted to see her suffer.

“I would love to see them share the shack,” she said.

Oscar said Abycia is history to him and he doesn’t love her anymore.

“She was my girlfriend, but there is no love between us any more,” he told Daily Sun.

Oscar said they separated two years ago, and he’d not slept with Abycia ever since.

“I want her to leave me alone as I need my own space. She knows it’s my shack, but she doesn’t want to leave.”