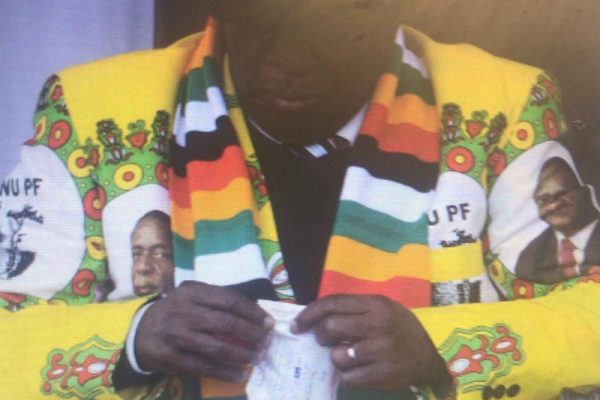 I have searched deep and wide for reasons why President Mnangagwa is seemingly unperturbed by the accelerated plunge of this country.

I found no plausible reason except that he can only be unwell. Genuinely concerned patriots can only suspect that President Mnangagwa must be so unwell that he is by now incapacitated.

How can the economy continue to slide at this rate without some sort of emergency being declared? How can corruption happen so openly with high profile thugs knitting their way into and out of Government circles at will without the President uttering a word?

The President must surely be unwell.

There are so many other how and whys; the list is endless. Seriously the President must be unwell!

Remember here is a President who on getting into power in November 2017 got civil servants on their toes by declaring 100 day targets and things seemed to start working again. Here is a President who saved the nation from an inevitable Mugabe dynasty where the mercurical Grace was bound to become the country’s next President.

Here is a President who upon getting into office declared zero tolerance to corruption but now watches haplessly as cartels and foreign currency black market monsters run the country’s economy with impunity. Here is the President who promised to act on land barons and six months after the Land Commission report, its life as usual. Here is the man who declared jobs to the people but is content to see his party apparatchiks dishing out cups of rice from China to a starving populace.

Here is a President who promised power, good roads, quality education, clean water but disappears into a cocoon as the little that exists of these things dries up.

Here is the man who did not only give Zimbabweans but the whole international community great hope that the jewel of Africa will be picked up from the dustbin spruced up and put back on its high place. Technocrats believed and had immense confidence in him. Never mind the way he got into power, the Diaspora ululated to high heavens, many were packing their bags, ready to come back home on the next flight.

I must admit that I also saw hope in him. Pragmatically, Mnangagwa was the best candidate.

Here is the man who toured some of the world’s biggest asbestos mines in Mashava and Zvishavane in 2018 and told desperate job seekers that in weeks dynamite would be exploding underground again and drilling machines cracking their way into hard rock. He never returned to tell such tales.

He visited the defunct Cold Storage Commission in the Ancient City and brought with him an investor who would revive the company and ensure Zimbabwe is once again the supplier of the best meat in the World. Alas CSC is more defunct with all workers retrenched and the stage set for epic court battles between the new employer and labour.

Zimbabwe is an agricultural country and thousands of herds of cattle in Mash West, Mash East, Manicaland and Masvingo have been decimated by mysterious illness and not for a day has the President issued a policy statement on the matter.

Surely such rapid disintegration of things can only happen when the President is so unwell.

Here is the man who promised heaven to Zimbabweans in 2017 but now sits back and watches unmoved as people kick and scream on their way to hell.

Surely this can only happen when the President is unwell.

Here is a man who in Mugabe’s own words is a hard worker but is now not doing any work. Mnangagwa has become indifferent, detached and so ordinary you wouldn’t think he is the man at the helm of a country.

There is no better evidence to advance the theory of his incapacitation than what we see on the ground. Incapacitation should not be limited to being bed-ridden, mental instability or physical inability but must also refer to the state of inaction, the lack of pro-activeness or the placidness.

Zanu PF, Parliament and the people of Zimbabwe must take seriously this evident incapacitation of the President and map the way forward together with Mnangagwa himself before this nation reaches a point of no return. There may be no statistics on the current death rates in Zimbabwe but it wouldn’t be surprising that the rate has doubled or trebled since President Mnangagwa took over the country.

The Coronavirus is there, it is really and Zimbabwe has been declared one of the most unprepared countries for the epidemic on the continent yet the President continues to act and see no urgency in problems staring the nation in the face.

Speaking up to power is not a crime but a form of patriotism. President Mnangagwa has played many crucial roles for his country. We are all mortals and when time comes to say goodbye we must take it.