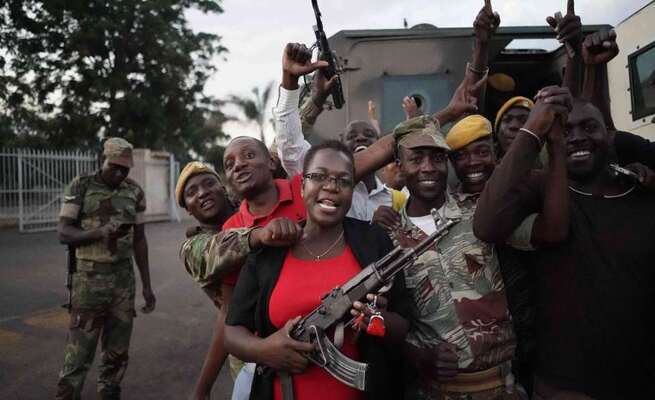 WHEN Solomon Muzanenhamo (39) trudged from Highfield high-density suburb to central Harare with a Zimbabwean flag draped around his neck in November 2017, 15 kilometres became like a stroll down his street.

He was among thousands who marched the streets of the capital city, demanding the end of the late former president Robert Mugabe’s 37-year rule.

As he walked into town, reminiscing wartime stories his grandfather had told him and euphoric scenes at Independence in 1980, Muzanenhamo felt he was writing his own little piece of history.

Marching to remove the liberator-turned-despot, Mugabe, was the highlight of his life as a “born free”.

Mugabe would eventually be forced to resign and pave way for his long-time mentee, President Emmerson Mnangagwa, whom he had fired earlier that month.

Having known only one leader his entire life, Muzanenhamo was hopeful that his life would instantly change. It felt like independence for a man who had never held a payslip in his 35 years living in Zimbabwe. Four years down the road, he finds himself in the same predicament.

Living on menial jobs to take care of his wife and three children, he thought life would take a dramatic turn for the better.

“I thought a new day had come,” he told The NewsHawks.

“There was a sense of independence, I cannot explain the feeling. I felt like suddenly I held the key to my own destiny,” Muzanenhamo added.

The 39-year-old said: “I remember we walked all the way to town with a bunch of friends and other people who were as excited as we were. The excitement was palpable and I had never felt so much unity among my fellow countrymen. We all wanted one thing. We wanted Mugabe to go. He was the only person standing between me and my desired future.”

Four years later, he regrets ever believing that Mnangagwa was God-sent.

Mnangagwa, viewed by some as a pragmatic leader and different from Mugabe, returned from exile in South Africa promising heaven on earth to long-suffering Zimbabweans.

His rhetoric struck resonated with the wishes and aspirations of citizens. Even some sections of the international community were impressed as he struck a reconciliatory tone. He gave his ministers 100 days to turnaround key sectors of the economy. Zimbabweans dared to believe.

His “Zimbabwe is open for business” mantra raised the hopes of millions of unemployed youths, but four years on, the mothballed economy is not only downsizing, but also retrenching as government policies come unstuck.

“Today, we are witnessing the beginning of a new and unfolding democracy,” Mnangagwa gushed after returning from exile.

“The voice of the people is the voice of God. No one is more important than the other. We are all Zimbabweans. We want to grow our economy. We want jobs,” he added.

For Muzanenhamo and his friends, the belief was that they would finally get the jobs they went to school for. Having studied as a chemical engineer, the 39-year-old has failed to find employment. Employment opportunities abroad have also been elusive as he failed to raise enough money for conversion examinations and SAT examinations that allow African graduates to work and study abroad.

“I thought life was going to change but it is getting worse. The friends I marched together with have all left for South Africa. I am stuck here and, from the look of things, the government has no plan,” he lamented.

Weary of Mugabe and his ruinous economic and political policies, Zimbabweans were optimistic.

Euphoria premised on the pledge of change and a prosperous Zimbabwe engulfed the streets as many hoped for the dawn of a new era in the country’s history.

But reality quickly brought citizens down to mother earth after economic fortunes plummeted in the run up to the 2018 elections.

Four years after the military coup that led to Mugabe’s departure, Mnangagwa is still struggling to deliver on his promises.

Teetering on the brink of collapse, as inflation is re-emerging following months of stability, Zimbabweans continue to be exposed to the vagaries of life in a failing state, with the currency on a death spiral, according to economics professor Steve Hanke.

The Zimbabwe dollar continues losing ground against the US dollar, with the parallel market rate ranging between US$1:ZW$175 and US$1:ZW$200, with economists warning the local currency is in peril.

According to the World Bank, over half of Zimbabwe’s population have plunged into hunger since the Covid-19 pandemic began.

“The number of extreme poor is expected to remain at 7.9 million in 2021 amid continued elevated prices, and a slow recovery of jobs and wages in the formal and informal sectors,” according to the report.

“Given limited social safety nets for protecting the high numbers of poor, households are likely to turn to negative coping strategies,” it said.

For single mothers like Faith Nyoni (29) of Hopley, a settlement near Harare, feeding her children has been hardest.

Living on vending secondhand clothes which she sometimes barter trades for maize which she resells, Nyoni is struggling to earn a decent living.

“My small business does not give me much every month. I have to shoulder the burden of feeding my child and my sick mother. Things have remained the same since we removed Mugabe. The way things are, it is as if we never changed a president. Our leaders should look out for us,” she said.

With no history of coups, Zimbabwe had a bloodless military takeover that lasted one week in 2017, events that shocked the world with Mnangagwa emerging as President.

Orchestrated by the military chief, Constantino Chiwenga, who became vice-president, the Zimbabwean coup was rubber stamped by citizens, opposition parties and civil society.
However, long after the euphoria has died down, Zimbabweans continue to be haunted by the events of November 2017.

The party also said it would uplift the dignity of women, but injustice towards women continues to be the order of the day, including to Chiwenga’s estranged wife, Marry Mubaiwa. Marry has been denied access to her children for almost two years.

The state has also denied her much-needed medical attention in South Africa.