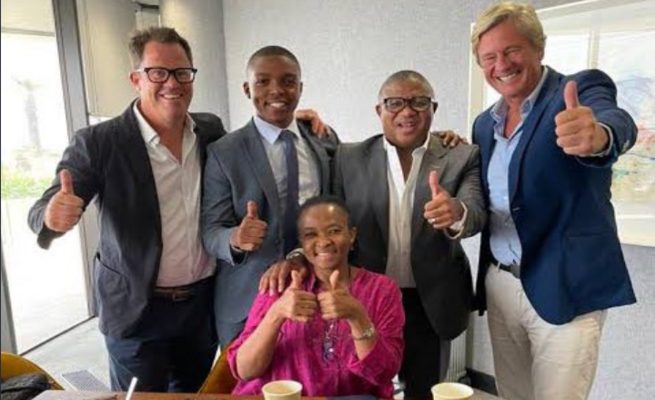 Nhlanhla ‘Lux’ Mohlauli (born 2nd September 1986, age: 35 years) is a rich businessman, activist, and motivational speaker from South Africa. Not only this Mr. Lux is a founder of Native Airways and a pilot too. He is now popularly known as the Operation Dudula Movement leader, a vigilante group which seeks to drive out foreign Africans who came to look for jobs in South Africa.

He earlier gained public attention when he along with his fellow team members saved Maponya Mall from the unknown looters. Saving the mall he becomes the star in the eyes of African people. He then becomes the leader of Operation Dudula. Many times he has been stated as the man with kindness and honors.

He has many times spoken for the downtrodden and this is what makes him a true leader. He every time gets involved in the different legal matters of South Africa.

On Thursday 3rd of March, the popular personality of South Africa Mr. Lux appeared as the special guest on the last telecasted episode of MacG’s podcast titled Podcast and Chill.

On his live Podcast, Lux splashed some water of awareness on Politician Like Julius Malema. He reveal all the facts and didn’t leave any facts unturned during the interview. He highlighted politician Julius Malema and shared why he is not responding to EFF leader M Julius, who earlier called Lux a sponsored thug,

Mr. Lux made happy many youngsters by sharing the reason why he is not answering Julius.

He spoke, “Julius has been shown too much hate by the system and by his own people to a point where he thinks everything is a fight.”

He added that Julius needs to be hugged by him as he requires some love. This statement has made him trending over the internet and many netizens are now sharing thanks to MacG for inviting Lux on his podcast.

As he has become popular once again here we will add information about him for his followers in this article.

Nhlanhla Lux Bio – Nhlanhlawhile sharing his success stories shared that he was born and raised in Soweto. Raising here is now living his life for the wellness of the Soweto people. He has admired that he has attended different schools.

First, he went to attend Parkhurst Primary and then went to Jeppe High School for Boys. But later he finished his high school education from a St David’s Marist when he got a scholarship offers from them due to his great excellence in sports.

He later got motivated to study politics after he came to know the fact that every school is white-dominated in suburbs. He then completed his degree from the University of Johannesburg in Politics. During his university days, he also remained ANC Youth League secretary on campus.

Growing young he was very much passionate about becoming a lawyer and always wanted to study law. Later getting bored to learn politics he went to the Chinese embassy to visit China. He went there for a visa application so that he can learn sports development from China. Getting a visa in 2007 he went there to pursue studies in sports development.

He was good at sports games like rugby, golf in his school days. Coming back from China after one year he decided to study golf at Professional Golfer Association (PGA). Later he started his own business.

Nhlanhla Lux Wiki – A single piece of information that Nhlanhla has shared about his father is that his father was one of the biggest gangsters in a town. He due to his father always wanted to become a lawyer too. Because he has seen how lawyers changed his father’s life. At one time his father is in jail and one time he is out of jail just due to the lawyers.

“The first professional person I interacted with was a lawyer, and in my little head what he did was magic. One minute, my dad would be behind bars and the next he wasn’t, and it was all because of the lawyer”

Adding more he also claimed openly on his recent podcast interview with MacG that his father and his alleged gangster have paid his 5 years school fees in advance following a successful cash-in-transit (CIT) robbery.

Struggling here and there and working as Golf Teacher Nhlanhla started his own aviation company earlier. He did this because he got influenced by the aviation business and added five other partners to his business.

He named his company Native Airways. It is a proudly South African private aviation company. This company of Lux offers personal jets and helicopters to customers. It also offers skyline advertising. His company planes fly for both domestic and international routes. Native Airways services all the political and business needs of people.
Nhlanhla Lux career and profession

He then entered this business first hired the pilots on salary but that was costing high for him. So later he enrolled himself to learn plane flying. He entered the Superior Pilot services and qualified as an expert pilot.

He now also works full-time for his company. Adding more about his company, his company also raises funds for girls. They are running a campaign with the name of Female Bursary Fund which helps in assisting girls who want to learn aviation and become pilots.

He founded this company back in 2015. But after raising a good income from his work he also got involved in political matters. As we told above he protected the Maponya Mall from the looters. He became politically active.

Today he shared his profile as President of the Young Peoples Government of South Africa Working as leader of this organization he works to build a strong nation that prioritizes family and communities.

The young entrepreneur Mr. Lux appears to be single. He has not shared any cozy picture with any girl. But yes he has many girls connected with him in his friend’s circle. He has gone out for a party with girls in his friend’s circle. He is a gentleman and respects women and kids a lot. Mr. Lux always shared that he loves kids and wants his country every kid to get educated.

With his high earning net worth of more than $1million Mr.Lux lives his life with full luxury. He usually goes for tracking. He loves to eat in costly restaurants and more.

In his personal life, he has been invited to various award functions and Political meetings. Publically he is so much famous in his home town and country.

He due to his high achievement in life has been invited by city leaders to address the people of Johannesburg as a motivational speaker.

Who is Nhlanhla Lux?

He is a businessman and activist from Africa.

How tall is Nhlanhla Lux?

Mr. Lux appears to be 5 feet and 7 inches tall

How old is Nhlanhla Lux?

When was Nhlanhla Lux born?

How much Net worth does Nhlanhla Lux have?

Mr. Nhlanhla is having a net worth of more than $1 million USD.

Is Nhlanhla Lux a pilot?

Yes, Mr. Lux is running his own aviation company and also flies planes