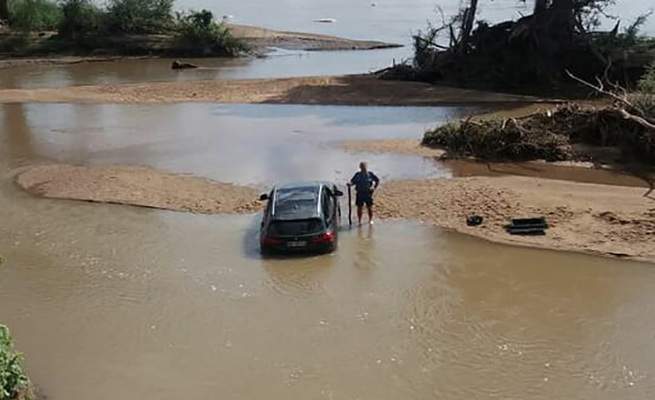 ZIMBABWEAN and South African authorities are locked in a tug-of-war over a Toyota Lexus SUV car worth about R500 000 that is stuck in the Limpopo River at Gate 1 after a failed bid to smuggle the vehicle to Zimbabwe by driving across the river.

The war is emanating from who has the jurisdiction over the vehicle.

The officer commanding Beitbridge Police district chief superintendent Tichaona Nyongo confirmed the presence of the vehicle stuck in the sand after the suspected smugglers stripped it after hitting a dead end.

“We heard it got stuck while being smuggled from South Africa.

“Realising the challenge, they (smugglers) decided to strip it of some parts. Efforts by Zimra and the security forces to recover it hit a snag as well, so I heard,” Nyongo said.

This publication understands the vehicle, which has been on the riverbed for close to a week had all tyres removed.

A source said a dispute arose between South African and Zimbabwean authorities over the custody of the vehicle.

Smugglers have over the years brought into Zimbabwe a number of vehicles through the porous South Africa and Zimbabwe boundary.

Most of the vehicles are hijacked in South Africa and smuggled into neighbouring Mozambique through Zimbabwe.

Other unconfirmed information says some high profile people in Harare bought the smuggled vehicles they somehow registered in the country for local use only, or stripped them for spares.

“The persistent operations being conducted in the province to fight against crime, including the smuggling of vehicles and other stolen goods across the border, continue to yield positive results after two motor vehicles worth R1,2 million were on September 1, 2022 intercepted at Nyl Plaza tollgate under Mokopane policing area,” Limpopo Province police spokesperson Motlafela Mojapelo said.

“The two drivers, a South African (52) and a Lesotho national (25), were arrested after the initial probe indicated that the vehicles, worth R1,2 million combined, were hijacked in Tembisa and Hartebeespoort (Gauteng Province) respectively and were to be smuggled into Zambia via Beitbridge port of entry,”

He said members of the Limpopo Tracking Team and the Mahwelereng Flying Squad conducted a joint operation after receiving information from Crime Intelligence unit about two high jacked motor vehicles, a Toyota Hilux Legend 50 and Toyota Hilux 2,8 GD6 that were to be smuggled out of the country.

One of the vehicles was fitted with false registration numbers from Lesotho.

Further investigations revealed that the 52-year-old suspect is known to be a runner for smuggling stolen vehicles into neighbouring countries and was positively linked to a number of cases on possession of suspected stolen motor vehicles, the latest having been committed in Pretoria in June 2022.