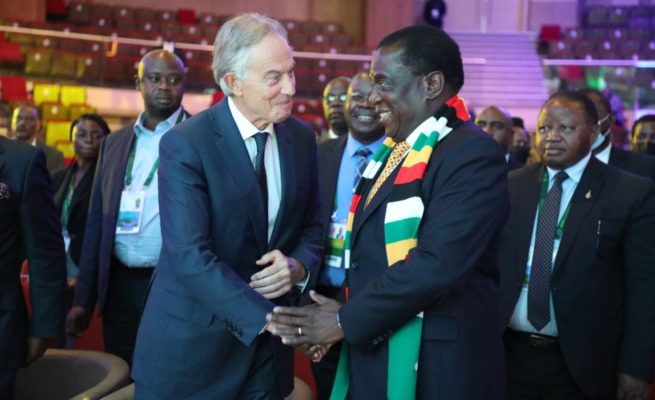 PRESIDENT Mnangagwa was yesterday complimented during the plenary session at the Africa Green Revolution Forum 2022 in Rwanda for stressing on the need for agricultural trade, and then in a historic moment, shook hands with former British Prime Minister Tony Blair, breaking years of icy relations with the ex-Labour party leader.

Mr Blair had an extremely acrimonious relationship with Zimbabwe during and after the land reform programme and he was one of the foremost campaigners for illegal sanctions, but now seems to recognise the changing times.

For Zimbabwe to flourish, we cannot let history hold us back.

It was a pleasure to meet Tony Blair (@InstituteGC) and Baroness Scotland, Secretary General for the Commonwealth (@PScotlandCSG). pic.twitter.com/JOlm9udnq6

Mr Blair, who was British Prime Minister from 1997 to 2007 and took a tougher stance against Zimbabwe after the country embarked on the land reform programme, noted and acknowledged President Mnangagwa’s contribution to the plenary, when he highlighted the importance of intra-African trade in boosting agriculture on the continent.

The President and Mr Blair participated in a plenary session on accelerating food systems in times of crisis.

Soon after Mr Blair made his remarks, he shook hands with President Mnangagwa, something all British leaders at various international forums avoided after the former colonial power and its Western allies imposed crippling sanctions on Zimbabwe.

Commentators at the AGRF summit here saw this as a beautiful moment shared by the two statesmen.

Britain also withdrew development aid and sanctions were imposed on Zimbabwe by the European Union in 2001.

But ever since President Mnangagwa assumed office, he has gone on a re-engagement drive to build closer ties with Western countries.

The President has aggressively promoted the Zimbabwe is Open for Business mantra, attracting massive investment into the country.

The late President Robert Mugabe railed against Mr Blair at various political fora, labelling him “B-Liar” and saying famously at the Earth Summit in Johannesburg in 2002: “Blair, keep your England and let me keep my Zimbabwe”.

Mr Blair, in retrospect, has been reconsidering his stance on Zimbabwe.

“I was actually thinking about Zimbabwe the other day. I think, at certain points, there were misunderstandings, not genuine disagreements. If Zimbabwe were to get its act together it would be an exciting place to be.”