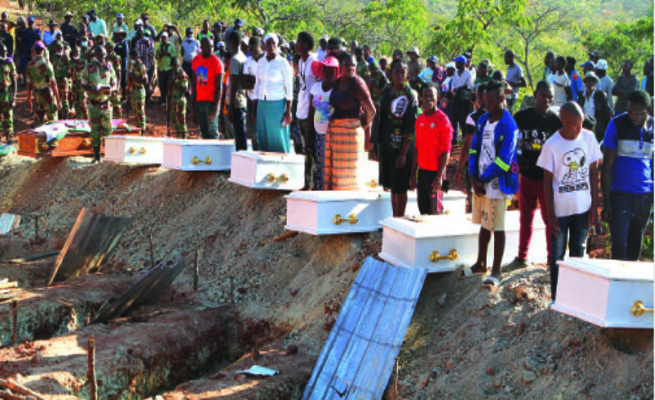 THE remains of 20 freedom fighters who were killed and buried in different spots across Nyanga District during the liberation war were on Monday accorded decent reburials at Matumba Six Shrine in Mutasa District.

The Manicaland Identification, Exhumation and Reburial of Fallen Heroes Trust (MIERFHT) and Zimbabwe National Liberation War Veterans Association (ZNLWVA) facilitated the whole process, while Doves Funeral Services donated the 20 coffins that the heroes were buried in.

The remains were discovered by the community and MIERFHT was called in for assistance.

The names of the 20 were identified by spirit mediums and their families were notified. Most of the families managed to attend the re-burial.

Minister of State for Manicaland Provincial Affairs and Devolution, Honourable Nokuthula Matsikenyere lays a wreath on the graves of the fallen heroes and heroines after their re-burial at Matumba 6 Shrine in Mutasa on Monday

Remains of seven heroes were exhumed from Avilla Mission, five from Mudzimu-Ndiringe Mountain, four in Katerere Village and another four in Nzeve Village.

Some were buried in shallow graves, while some were in caves.

Speaking at the re-burial ceremony, Minister of State for Provincial Affairs and Devolution, Honourable Nokuthula Matsikenyere urged communities to keep working with Government in identifying areas where liberation war heroes who died during the war remain are laying.

She said it is Government’s wish to give befitting and decent burials to all fallen heroes and heroines.

She said this can only be made possible if communities work together with Government in identifying areas where unidentified liberation war heroes and heroines were buried.

“The masses fully participated during the liberation struggle and they have the knowledge of who was buried where and how they died. The communities have that history and can help Government in archiving it, but only if we work with them,” she said.

Minister Matsikenyere said incentives must be availed for exhumers to be motivated in exhuming and re-burying liberation war heroes.

Speaking at the same occasion, Mutasa South legislator, Cde Misheck Mugadza urged Government to provide funding for the re-burial of the fallen heroes in the national budget, saying this will help in giving closure to families that had lost hope of finding their loved ones.

“As long as our brothers and sisters who fought for us to gain our independence are still lying in shallow and unmarked graves, their families and the country at large will have no closure.

“I applaud the efforts that MIERFHT and ZNLWVA, supported by Government, are doing to facilitate the re-burials,” he said.

Father to slain Cde Margaret Nyakarize, Mr Luka Nyakarize, said for the past 42 years, he had been wondering where his daughter was buried.

He only got closure in August after the MIERFHT contacted him with the news.

“I was shocked that all along my daughter was buried in the same grave with another comrade, Cde Laina Funa, very close to us. All along I awaited for her return, but today I have got the chance to bid her farewell. I would like to thank Government, MIERFHT and ZNLWVA for working together in giving us closure,” he said.