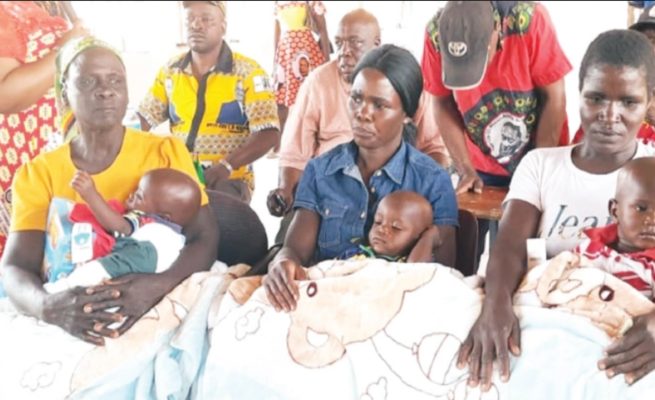 Having triplets is as rare as one’s chance of having a one-on-one with the President of a country, and having them named after the top hierarchy of a country is rarer.

The lucky triplets from Siakobvu in Kariba district were named Emmerson, after President Mnangagwa, Constantino after Vice President Chiwenga while the last one was named Emmanuel, but is, however, known as Kembo after Zanu PF Second Secretary Cde Mohadi.

Born on September 2, 2021 at Chinhoyi Provincial Hospital when President Mnangagwa was officially opening the Chinhoyi Courts Complex, word got to the President that triplets had been born.

Touched by the plight of the family, the President sent emissaries who gave the family some assistance.

Senator Joseph Chirongoma provided transport to take the family back to Chikuro Village, under headman Chipiruka in Ward 7 of Nyaminyami Rural District Council under Chief Nebiri.

The family also received an undisclosed amount of money at the handover ceremony of the gifts in Siakobvu at the weekend.

The birth of the triplets shocked the family which never thought of that, throwing their preparations into disarray.

Realising the fragility of the condition, medical staff at the hospital advised that delivery had to be done through caesarean section.

The mother, Ms Precious Ngwenya, said she went through the pre_gnancy without ever imagining that she would add three more children to her brood of five at once.

“I had five other children already, comprising four girls and a boy. The birth of the boys came as a complete surprise,” she said.

“It was not easy because I was not producing enough milk to satisfy them. We had to supplement their diet with cereals so that they get enough food.”

Looking after the triplets was a nightmare as they needed attention at the same time.

They would cry simultaneously, she said.

The father, Mr Jairos Chipiruka, could not hide his gratitude for the President’s gesture.

“Things have been difficult since the birth of these children as I am not working, but had to try everything just to get them enough to eat and clothes,” he said.

They had to give the children watery cereal which they gradually hardened as they grew.

Asked about the idea of naming his children after members of the Presidium, Mr Chipiruka said he has always revered the ruling party Zanu PF.

“We just decided to name the one who was born first Emmerson after the President, the second after his deputy VP Chiwenga and the third Kembo, although he is named Emmanuel,” said the affable but shy father.

He said the Zanu PF provincial leadership provided transport to Siakobvu from Chinhoyi Provincial Hospital and other necessities after birth, saying they had been sent by the President.

Delivering the message during the handover of foodstuffs and other necessities, Mashonaland West Provincial Affairs and Devolution Minister, Mary Mliswa-Chikoka, hailed the President’s responsiveness.

“The President was quick to respond as soon as we highlighted the plight of the family and other well-wishers came on board pledging to pay all the fees for the triplets when they start going to school,” said Minister Mliswa-Chikoka.

She said support for the family would continue to be provided.

To the parents, the triplets’ characters and demeanour are baffling.

But how do they distinguish the three?

“Their facial expressions are one distinguishing factor. Constantino carries a serious demeanour, it looks like he brooks no nonsense.

“Emmerson and Kembo are a bit on the quiet side, but their faces are quite relaxed. At least that is what we have been able to observe to date,” said Mr Chipiruka.

Anyone seeing them for the first time or even several times, it is not easy to tell them apart.

The family also received solar lights from Zoneful Energy, which are expected to replace candles and paraffin powered lamps.

Owing to the demands of looking after the triplets, an extra pair of hands from Mr Chipiruka’s mother, Gogo Maina Chipiruka and a relative, was required.

Minister Mliswa said no one would be left behind in the country’s development matrix in line with the mantra, “Leaving no one and no place behind”.

The Chipiruka family got a triple blessing which they were not prepared for, but its magnitude, got them the attention of the First Citizen, and true to form, he acted.

Quite clearly, the destinies of Emmerson, Constantino and Kembo, have been defined by a single act of reverence to the country’s leadership.