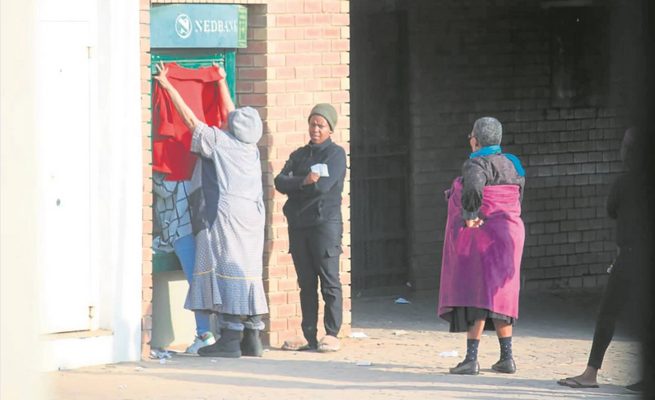 ATM ROBBERS are forcing people to come up with ways to protect their PIN numbers.

So a gogo from Etwatwa tried to protect her grant money by covering the ATM with a jersey while her daughter withdrew it.

This is because people using the ATM near the shopping complex are said to be targeted by thugs.

“Kasi ATMs are where thugs fish. They put something to trap your cards and they pretend to help, and that’s when they strike,” said gogo Anna Ngwane (67).

Another gogo, Idah Simelane (71), said they now go with their trusted children because they know they will be protected.

Madala Obed Skoti (63) said his heart is still bleeding after he was robbed of part of his pension from the ATM two years ago.

However, Etwatwa Police Station said they have never received complaints from the public regarding robberies at local ATMs.

Sergeant Khensani Mathebula of Etwatwa Police Station said there are previous cases of ATM robberies and they have taken it upon themselves to create awareness by putting pamphlets on ATMs to alert users.