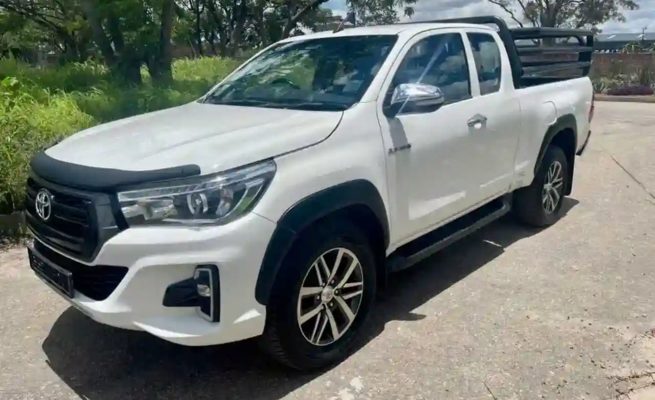 IT’S a powerful vehicle which was at the heart of the Ximex Mall ‘TOES-FOR-SALE’ fantasy in Harare.

Today, it is at the heart of the raid, at a Pretoria housing estate, which ended with dealer, Sam Mubaiwa, being nabbed by South African police last week.

“The vehicle had a tracker that was not removed or found (by those who ‘stole’ it) and it gave the vehicle’s location to the owner,” sources told H-Metro.

“The owner of the car arrived at the estate claiming that a device inside the car was showing its location.

It was the vehicle that was found inside the parking lot of the house on the estate, where Sam was staying, in Pretoria.

This particular Toyota Hilux make has become popular in South Africa, especially with owners of the commuter omnibuses, which are known as taxis, in Mzansi.

It created its legend in Zimbabwe when the ‘TOES-FOR-TRADE’ fantasy was at its peak.

There were claims that some South African businessmen were prepared to buy human toes in exchange for the Hilux.

Sam was arrested on suspicion of running a cartel, involved in a spate of vehicle theft cases, and human trafficking in Pretoria.

He is the son of former Dynamos chairman Kenny. His residence was raided, and police also found more than 20 number plates.

“Dear residents, the suspect staying in Stand 191 is still at large in the estate,” read one of the messages, exchanged by residents of the estate, during the police raid.

“Resident of 191 will be refused entry into our estate. Police in charge, drone will search the estate tonight.

“Please keep all doors locked, and lights on.

“Stand 191 was used as a storage/cool off point for stolen vehicles by the resident – Zimbabwe citizen, for some time now.

“The suspect ran away from the police last night, but was arrested this morning.

“We tracked several vehicles that he brought into the estate with his credentials, abusing our security systems.”

“It is the same resident that brought a court order against us in July to reinstate his power, at your expense, not abiding by our rules, expecting us all to pay for his consumption of electricity, and water.

“We are opposing his bail and will not let him into our estate again. We want to thank Fidelity for their response and assistance, from the drone, and extra staff to advice given.”