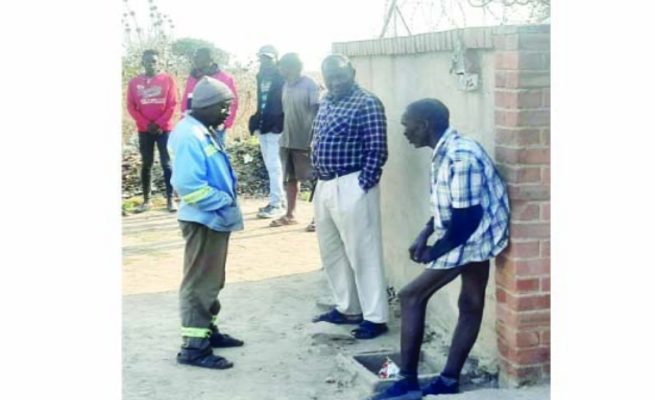 A family from Cowdray Park suburb in Bulawayo had the shock of its life when it woke up to find an old half-nakəd man curled up fast asleep in their yard.

The incident which had caused a stir in the suburb happened on Tuesday morning.

Stunned residents reportedly thronged the house to catch a glimpse of the half-nakəd man, with some residents suspecting he was a wizard who had run out of powers.

Speaking to B-Metro the owner of the house Naison Mushonga (52) said he was awakened by a call from his son Philemon who was on his way to work informing him about the incident.

He said soon after receiving the call, he quickly stepped out of the house only to find a half-nakəd man lying in their yard and informed his wife.

“Soon after seeing the half-nakəd man inside our yard, I asked him where he was coming from and he was just stuttering saying things I couldn’t understand. I later went to the residents’ chairman and we decided to report the matter to the police.

“When I returned home in the company of two police officers there was a large group of stunned residents at my house who had gathered to witness the strange spectacle.

“The police then requested us to give the man something to cover himself before they took him with them,” said Mushonga.

A resident who identified himself as Dlodlo said the man seemed like he was mentally unstable. He said on the previous day, the man had gone to Cowdray Park Police Post and asked for accommodation.

“It seems he sneaked out at night without anyone noticing him only to be found at Mushonga’s house half nakəd. Although it was scary, it’s not true that he is a wizard as some residents wanted us to believe. This is because when we asked him where he was staying he was just hallucinating saying he stays here,” said Dlodlo.

Another resident who requested anonymity said: “We are really terrified because we have never witnessed anything like this before. We have read in newspapers but never really thought it could happen to us”.

In May this year a similar incident happened in Magwegwe suburb when a man who said he was from Binga and whom residents suspected was a wizard reportedly fell onto a rooftop in the suburb, and failed to explain how he found himself in the suburb.

Residents claimed that when they woke up in the morning to perform their daily routines, they were shocked to see the nakəd man in question who claimed to have fallen from a winnowing basket during a witchcraft mission.