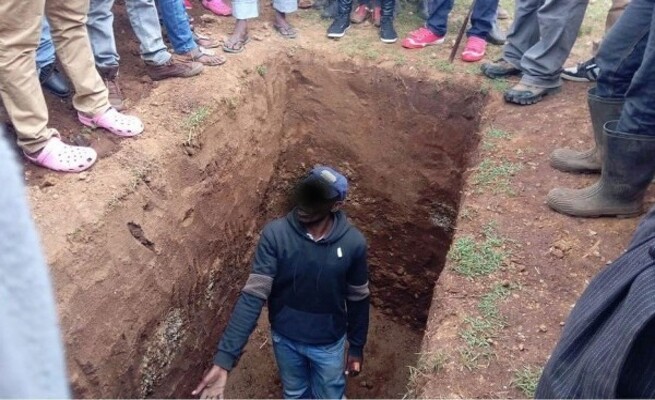 GONTSE RASEALE had been missing for a long time and when his body was found, it was already badly decomp decomposed.

The family was still grateful that they could bury him and get closure – but that won’t happen soon.

THEY CAN’T BURY GONTSE BECAUSE HIS BODY KEEPS DISAPPEARING!

Gontse Raseale (36) was found dead in the bushes in Mogwase, North West.

His brother, Thabo Raseale (34) from Mathibestad, told Daily Sun that his body was found last September.

Gontse had apparently died by suicide.

Last November, the family went to the Mogwase mortuary, where the body was indentified. They then proceeded with funeral arrangements. The grave number was secured, funeral insurance company alerted, and preparations were made.

But family members are fuming after the body disappeared from the mortuary.

Thabo said the police came to their home again in May. Apparently, the mortuary in Rustenburg was not working and the body was moved to Brits.

“They told us to prepare for the funeral and come to Brits to once again identify the body,” said Thabo, adding that they took two DNA tests from family members.

“I saw my brother’s body in Brits in May. I identified him with his silver ring on his left hand, dreadlocks, scratch on the nose and gap in his lower teeth. The body was in a bad state, but I could still identify him,” he said.

The family has not received the body because once again, it went missing!

Sister Patricia Rakgekola (50) said for two weeks, they were preparing the funeral.

She said she took the DNA tests with her mum, yet had still not received the body.

Patricia said the family had spent almost R20 000 for the funeral that didn’t happen.

She said that she had gone to pastors and traditional healers hoping to get help, but with no luck.

“What hurts the most is that no one is willing to investigate what could have led to the disappearance of the body. We will be taking steps against relevant authorities as part of assisting the Raseale family.”

Thabo said the family was battling to find closure because every time they thought about Gontse, their heartbreak started again.

“My brother was a good person. I will remember him for his unconditional love.”

North West health spokesman Tebogo Lekgethwane said: “The department is aware of this case, and the district management is handling it. The province will make a follow-up to track progress.”

Lieutenant-Colonel Amanda Funani said an inquest docket was opened at Mogwase Police Station after a body was found in the bushes.