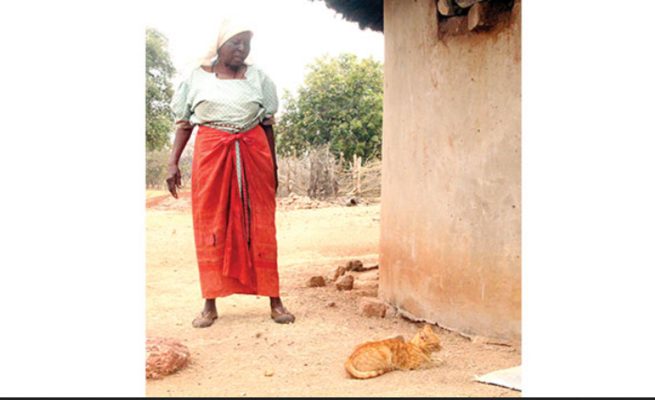 IN a rather stranger than fiction story, villagers in the Mpoki area in Gokwe were left in shock and disgust after a male cat recently gave birth to three surprise kittens, in a case the community has strongly linked to acts of witchcraft.

Yes, you read it right, a male cat gave birth to triplets and one of them died soon after being delivered.

The unusualness of the news which made it classic viral content prompted a B-Metro news crew to visit the family which is still trying to come to terms with the shocking incident.

In an interview, the owner of the cat Gogo Catherine Makoni (90) narrated the shocking incident and how her male cat took a while to deliver and how she ended up assisting it.

She admitted that the whole thing was “shocking and scary.”

“I am still in shock and the whole thing is scary,” she said.

“This is the first shocking incident to have happened in our family and community. I became suspicious when the cat’s belly started getting big but I didn’t expect that it was preg_nant since it’s a male one.

“I was shocked on the day it gave birth to three babies and one of them died soon after birth. On the day I noticed that the cat was now becoming a little restless, and it was very much exhausted and that is when I called my daughter-in-law who swiftly came and examined it but also didn’t believe it to be preg_nant.

“When it was now about to give birth she ran away leaving me behind alone watching it. I helped it deliver successfully. Soon after delivering, the cat cuddled the babies, licking them, and even desperately trying to suckle them,” narrated Gogo Makoni.

She said she did not know what could have caused her lovely male cat to produce babies adding that she was wondering what to do with the animal.

“After that happened I was even scared to kill the cat and in a bid to get rid of it I wrapped it together with its babies with a mosquito net and dumped them in a bush a few kilometres from my homestead but surprisingly after a few hours the cat came back but without the kittens. I suspected that there was someone who untied it. The idea to dump the cat and its babies came after I realised that the cat could not suckle them since it’s a male one.

“I was again shocked when I threw it in the blair toilet and it came out unscathed. It now doesn’t want to see people and if it sees them it runs away and I’m surprised why it didn’t do so when you arrived here,” recounted Gogo Makoni.

She said the incident had scarred her for life and was a nightmare she won’t be able to forget all her life.

Although the community has strongly linked the rare spectacle to witchcraft, Gogo Makoni disputes any form of black magic.

“Although, I don’t subscribe to witchcraft acts, maybe it’s a sign of something bad that is about to befall my family,” she said while flailing her arms as if they were not part of her body.

She is now calling on assistance from experts who deal with such cases to assist in how she should take care of it.

She reiterated that it was demanding and taking a toll on her other daily routines. Villagers who spoke to B-Metro claimed the bizarre incident might be linked to witchcraft.

“This is the first in this area. It’s very unusual; I’ve never heard of that before. This is the first ever such event to happen in our village,” said a community member who chose to remain anonymous.

Chief Nemangwe, whose jurisdiction the area falls under, could neither confirm nor deny the incident.

“Although I heard the rumours about the incident, it has not yet come to my attention. But as a traditional leader if something of that nature happened in your area of jurisdiction you are supposed to be told for action to be swiftly taken and I am still waiting for that to happen,” said Chief Nemangwe.