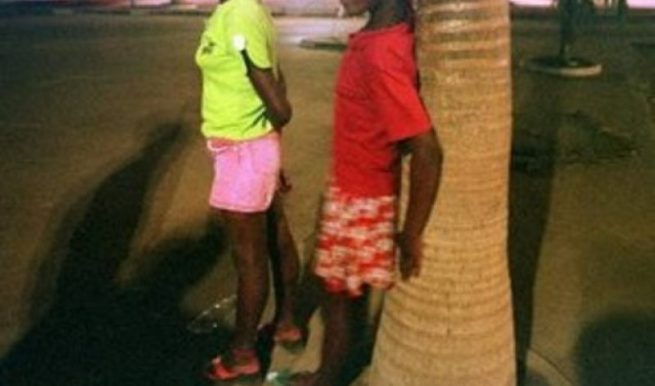 IT is exactly 8 pm and like sheep at a slaughter house, girls who appear to be 13 and 14 years old and spotting skimpy skirts that reveal the greater part of their legs, parade on the entrance that leads into one of the popular nightclubs at Gokwe Town also known as Gokwe Centre.

They are smiling at every patron that enters the drinking spot. Some of them are quite beautiful, looking like models.

Inside the bar, some tottering in stiletto heels and miniskirts, criss-crossed the dance-floor while dancing suggestively to the accompaniment of blasting sungura music and gulping alcohol in the process.

In no time one of the girls who looks younger than many of them and wearing skin-tight white leotards and a white pullover which makes her a prized commodity is approached by a man who whispers something into her ears before they all disappear into a nearby unfinished building.

This reporter witnessed the young girls selling their bodies for as little as US$2. One after the other, they were picked by motorists to unknown destinations. It was apparently a sign of thriving business even as they look underage to be in the oldest profession.

One of the girls who identified herself as Nancy said she began selling her body to men a year ago, after her family failed to pay her school fees.

“Life here at Gokwe Centre favours the brave Chibaba (a euphemism for an old rich man who looks younger than his age). For a young woman like me, it is not an easy task to have se_x with five different guys in one day. I charge US$5 for a quickie and between US$10 and US$15 for a night.

“But it depends on the time of the month. If it’s mid-month I charge as little as $2 for a short time. If you’re not part of the scene, it’s hard to believe that pr0stitution has become normal for most young girls like me,” she said.

She resumed talking and apparently sank this reporter’s heart when she said to those clients who don’t want to use protection, she charges US$10 for a quickie and US$25 a night as “insurance cover”.

“So risky is the business that it is difficult to use cond0ms each time we engage clients. Sometimes we are infected with se_xually transmitted infections, and we have no option,” said Nancy.

Nancy (15) is among hundreds of girls from Zimbabwe’s rural regions who joined the s_3x trade in recent years.

Child pr0stitution has become a cause for concern at Gokwe Centre as girls as young as 12 have found a new form of employment and are being hired for s_3x by older men.

An investigation by B-Metro revealed that many of the girls have dropped out of school, as their families cannot pay school fees and joined the oldest profession in the world.

They are selling s_3x for various reasons, chief among them to get monetary returns as a result of poverty and negative peer pressure.

Research by the Zimbabwe Vulnerability Assessment Committee revealed that about 60 percent of local children in primary school were forced to go back home after their guardians failed to pay fees.

As a result, children have had to look for alternative means of survival, including commercial s_3x work.

Sadly, statistics indicate that child pr0stitution spiked the spread of HIV and Aids and confirms that the disease is mostly affecting younger sections of the population.

Besides poverty and dropping out of school, breaking up of marriages which has led to the absence of parental guidance and counselling to girls entering pub_erty, forcing them to indulge blindly in s_3xual activity are some of the factors that push young girls into s_3x work in Zimbabwe.

Another young s_3x worker who agreed to share her story under the condition that her name not be used said she dropped out of school and ventured into sex work soon after the death of her parents as her aunt who was now staying with her was no longer able to pay her school fees.

“I came here to stay with my aunt who is a vendor and this was after the death of my parents. When the Covid-19 pandemic started, it became difficult for my aunt to take care of me and pay my school fees. So a friend of mine initiated me into s_3x work,” she unashamedly said.

Another teenage girl, who identified herself as Lizzy bragged that they have had a constant customer base for their sex services as their clients believe that they were less likely to have sexually transmitted diseases.

“We are in hot demand from these older men who are always after our services as they believe that we are less likely to have s_3xually transmitted diseases. That is the reason why most of the time they demand unprotected s_3x from us,” explained Lizzy.

Lizzy said most of the young girls were earning a living through pr0stituti0n, adding that some of them had managed to open small markets where they sell second hand clothes and other wares.

Investigations also established that many of the teenage girls had experienced clients refusing to pay for services rendered, with some enduring s_3xual abuse and assault.

Old s_3x workers also lamented stiff competition from the young girls saying they had put them out of business because they were often preferred by almost every client who comes because they look young and more attractive than some of them.

“We are now struggling to earn a living due to stiff competition from these young girls. Their number is increasing at a high rate as compared to the number of clients and this is now one of the main reasons why clients are now sidelining us. These young girls charge very little for their services, because they don’t have many responsibilities,” lamented a commercial s_3x worker who identified herself as Madawu.

A resident Emmanuel Chiteka from Mapfungautsi suburb bemoaned the influx of young commercial s_3x workers who are operating from night spots in the town.

“As residents here we believe this is a sign of moral decadence. Young girls are increasingly taking to the streets to sell their bodies to be able to feed themselves and their families and we are calling for intervention measures,” said Chiketa.

According to the National Aids Council, there is a need for concerted effort by Government, individuals and the corporate sector to assist young people whose lives are trapped in a vicious cycle that leads ultimately to new HIV infections as the children seek ways of earning a living.

Various campaigns and organisations have been created in the country to protest against the existence of child pr0stituti0n.

Many of these organisations have been taking part in this joint battle through advocacy, information dissemination as well as provision of health services to women and girls including those that already involved in s_3x work.

This is because the United Nations Convection on the Rights of the Child, Article 34, of which Zimbabwe is a signatory, requires that the State should protect children from s_3xual exploitation.

The United Nations Children’s Fund (Unicef) is also working closely with children around the country to protect them from being involved in pr0stituti0n.