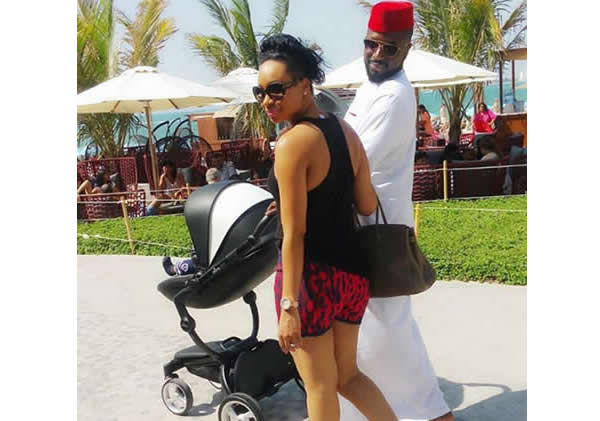 The Toyota Hilux Vigo for the former Big Brother Africa contestant is among various items listed on the charge sheet for the embattled Zanu PF secretary for administration who stands accused of fraud, criminal abuse of office and contravening the prevention of corruption Act.

The state alleges that Chombo applied for capital expenditure loans purportedly for agriculture equipment but splashed the money on his personal endeavors which included Pokelo’s swanky wheels.

“A Toyota Hilux Vigo black in colour engine number 1KD 9340021 chasis number MROFZ229GX01516518 was imported and supplied in the name of Pokelo Nare of 222 Samora Machel Avenue in Harare,” reads the outline.

The allegation is yet another big blow for the so-called “Queen of Swag” who is currently battling rumours claiming that she has split from her Ghanaian husband Elikem Kumordzie.

The two met in 2013 when they were in the Big Brother Africa House.

The two fell in love with each other, and a year later Elikem proposed to Pokello at the Ghana Music Awards Night in 2014. They got married in 2015 and have a son called Tristan.

Pokello, who first hogged the limelight in 2011 when her se xtape with Zim hip-hop star Stunner was leaked on social media, is highly regarded throughout the continent as a fashion icon.

Four years ago, she launched a clothing line in Ghana soon after she left the Big Brother Africa house. The line named Queen of Swagger (QoS) was launched at the Expression of Accra Fashion Show in Accra, Ghana.

Pokello also has a soft spot for expensive shoes such as Zara, Prada and Christian Loubouitin. In 2014, she launched her shoe label – Pokello’s Pink Bottoms – at her shop at Longcheng Plaza near the National Sports Stadium.

News Cynthia Goba - 1 March 2021 0
ZANU PF has made sensational claims that the majority of high-ranking officials in the MDC Alliance-led by Nelson Chamisa are set to defect the...

News Nelson Bhebhe - 1 March 2021 0
CEBOLENKOSI Mthembu’s acting and radio career is hanging by a thread after he lost his voice. The actor, who plays the cop Nyawo on Uzalo,...

Ginimbi’s rich friend Serge Cabonge reveals what they did during trips to Dubai with...

It only leaves me when the sun is about to rise: Man sleeps with...

News Muza Mpofu - 1 March 2021 0
FIRST the tokoloshe shares a prayer with him – then pokes him until the sun comes up! “The tokoloshe asks God to bless us,” Maqhawe...

My peni_s is shrinking, women are running away from me: Woman punishes boyfriend after...

News Cynthia Goba - 1 March 2021 0
FOR 11 months he cheated on his girlfriend until he broke up with her – and now he’s paying a big price with his...

Shock as chicken with knife fitted on its leg ‘stabs’ and kills owner, police...

News Cynthia Goba - 1 March 2021 0
COCKFIGHTING organisers in Southern India are on the run after a rooster allegedly killed its owner during a cock fighting event. It is alleged that...

Growing up, I used to think I was the only gay in Zimbabwe: Gay...

News Muza Mpofu - 1 March 2021 0
SHINGIRAI Musekiwa and Elton Chibhebhe fled Zimbabwe to come to South Africa because they are gay. Now based in Langa, the activist couple is fighting...

OPERATION MARI WAKAIWANEPI: Gvt to investigate Zimbos with questionable assets worth over US$100 000

News Nelson Bhebhe - 1 March 2021 0
THE net is closing in on individuals with questionable assets worth at least US$100 000 after the Zimbabwe Anti-Corruption Commission (ZACC) yesterday appealed for...