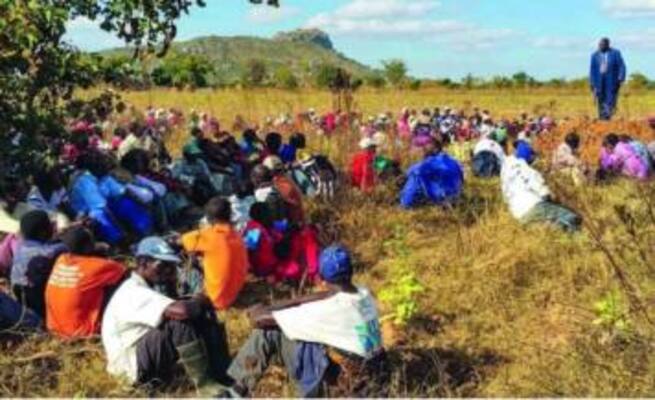 As measles reared its ugly head, seven children from a Honde Valley family recently succumbed to the highly contagious disease within a space of two weeks.

The seven children were aged between three and 11.

The Rode family’s remaining eight children were only spared after their parents took the bold decision to quit their white garment church and seek medical services for them.

Religious beliefs that discourage seeking medical services have been identified as the major cause of the current measles outbreak and the resulting deaths.

Mr Tendai Rode of Nyamaende in Honde Valley is still struggling to come to terms with the sad loss of his children.

He said the children’s funerals drained the family emotionally and financially.

In an interview with Zimpapers’ Television Network (ZTN), Mr Rode said it was painful to bury his children one after the other within such a short space of time.

“I am married to three wives and I was blessed with 15 children. All my children got infected with measles. This happened within a week and on day eight, some of the children who had developed a skin rash started coughing.

“The other child, aged five, succumbed to the same disease two days later. Barely a day later, the other girl who was doing Grade Two also died.

“The other child died the next day. We were all traumatised because five children had succumbed to the disease within a week,” said Mr Rode.

He said reality finally dawned on him that the whole family would be wiped out if he didn’t seek medical attention for his children.

Mr Rode and his wives threw their church doctrine aside and rushed to a medical facility with the other bedridden children.

“Watching my children dying one after the other made me think twice about my religious beliefs. I saw it prudent to quit my church and seek medical attention for my children at the local health institution.

“However, my 11-year-old boy who was being attended to at the clinic failed to make it. He died that very evening. The other one died three days later.

“So five of my children died before we could seek medical attention for them, while the other two died after our visit to the clinic. All the children were not vaccinated as this was against our religious beliefs,” said Mr Rode.

He added: “However, the measles tests done on my children were not conclusive. The skin rash had disappeared, but their coughing persisted. This disease cost me dearly and I have nowhere to start. All our resources were drained during the seven funerals.”

As of last week, Manicaland had recorded 3 010 cases and 347 deaths, mostly in Mutasa District.

Of those cases, 507 were vaccinated, while 1 982 were unvaccinated.

The status of 527 people was unknown.

About 1 574 children were treated and discharged, while 1 089 were still admitted in health facilities across the province.

In response to the measles outbreak, Government has deployed adequate mobile teams to vaccinate children between the ages of six months and 15 years.

Measles is caused by a highly contagious virus that spreads from person to person via airborne transmission, including breathing, coughing and sneezing.

The disease can lead to serious health complications like pneumonia and even death.

Although highly preventable through vaccination, the emergence of Covid-19 shifted attention from standard healthcare, leading to the disruption of routine immunisation plans and campaigns for infectious diseases, resulting in the current post-pandemic measles catastrophe, which now requires urgent intervention to counter and reverse.

In May, the United Nations International Children’s Emergency Fund (UNICEF) noted the increase in measles.

“The number of reported worldwide measles cases has increased by 79 per cent in the first two months of 2022, compared to the same time last year. It’s a worrying sign of an increased risk for the spread of the highly contagious virus and other vaccine-preventable diseases. There are fears this reported increase is the beginning of large measles outbreaks globally.

“Pandemic-related disruptions, increasing inequalities in access to vaccines and the diversion of resources from routine immunisation all play a role. Too many children right now are being left without protection against measles and other vaccine preventable diseases.

“As a result, the risk of large outbreaks has increased. In 2020, 23 million children missed out on all basic childhood vaccines. That is the highest number seen since 2009 and 3,7 million more than in 2019.

“The risk is also heightened as many communities have relaxed physical distancing practices that were implemented during the height of the Covid-19 pandemic.

That gives the measles virus a chance to spread faster among unprotected communities,” said the UNICEF report.