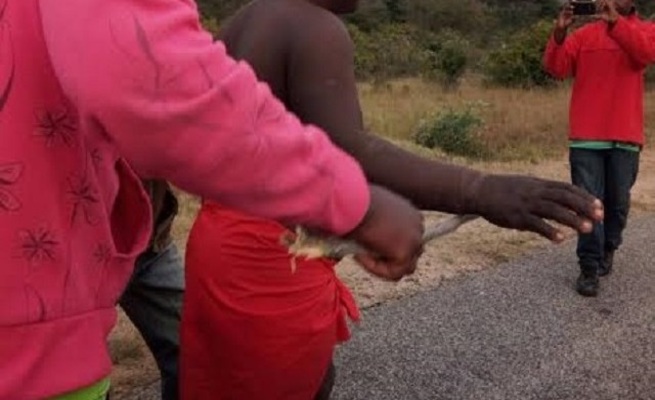 THE woman left home nak_ed, but no one noticed.

She was missing for several hours and later, her family got a call saying angry villagers were beating her and accusing her of evil deeds.

The 30-year-old woman from a village in KZN was viciously attacked after being found nak_ed on the premises of a homestead.

According to sources, the woman sometimes leaves home without knowing where she’s going but she eventually returns home safely. She can’t speak as she’s living with a disability.

A neighbour (33) said the woman lived with her parents, who are both mentally ill.

“They have little control over what is happening in their yard, as neither of them is mentally stable,” she said.

“When the daughter went missing, no one panicked because they thought she would return home as she usually did.”

The neighbour said when the woman left home on Saturday 11 September, her father went to sleep, assuming she would return later that evening.

“Because of their condition, they didn’t alert anyone and went to bed,” she said.

“The following morning, they were woken up by calls from angry villagers who wanted to kill the woman.”

The neighbour said when the parents arrived at the scene, their daughter was tied up.

“They told her father they would kill her, but he explained she’s mentally ill and not even aware of what is happening,” she said.

“He pleaded with the angry villagers to set her free and he took her home.”

The neighbour said what worried her was that the villagers claimed they found the woman at a homestead, but videos circulating on social media showed her walking on the side of the road.

In the video clip, she’s walking nak_ed while people in a car follow her and accuse her of being evil.

Social Development MEC Nonhlanhla Khoza has called for the arrest of the attackers.

“This is a horrible incident, which will scar the woman’s family physically and mentally,” she said.

“She needed help, but her would-be protectors became her tormentors.”

Khoza revealed that her department discovered the woman lost teeth during the attack as she was beaten and kicked.

“We need to see justice being done in this case,” said the MEC.

“Law enforcement must investigate this case and ensure that all involved get arrested.

People abuse others based on unproven allegations.”