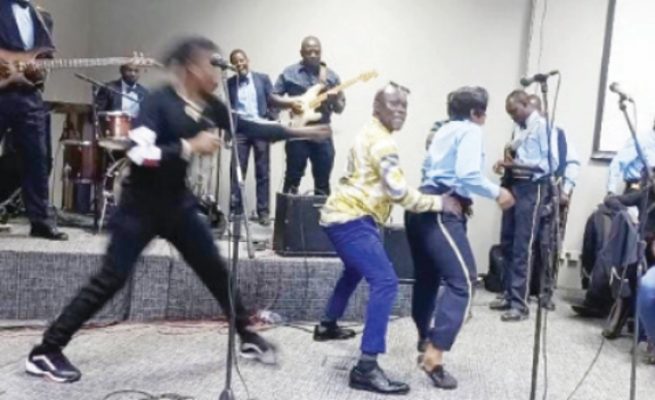 ORCHESTRA Mberikwazvo band member Jonas Kasamba had to be pulled away by his colleagues as he f0ndled a female ZRP Band member at a hotel last Thursday.

The incident happened in full view of senior police officers.

Kasamba, Majuice and Zaka Zaka performed with the ZRP Band at a fundraising dinner organised by the Ruwa community to build a police station for the suburb.

Alick Macheso was absent from the show.

“Aah, aaah, no that is too much zvakwana mudhara,” Majuice was heard saying as guests were taking pictures using their cellphones.

The Ruwa community, working closely with Chief Inspector Anna Chota, has been partnering the police in fighting crime such as armed robberies and stock theft.

Ruwa’s captains of industry, church leaders, farmers and teachers were part of the guests at the fund-raising dinner.

“We thank the Ruwa community for working hand-in-hand with police in fighting crime.

“Such partnership will see a crime-free society that will create an environment for business investment and peace.

“I would like to commend Chief Inspector Chota for teaming up with the community in this project,” he said.