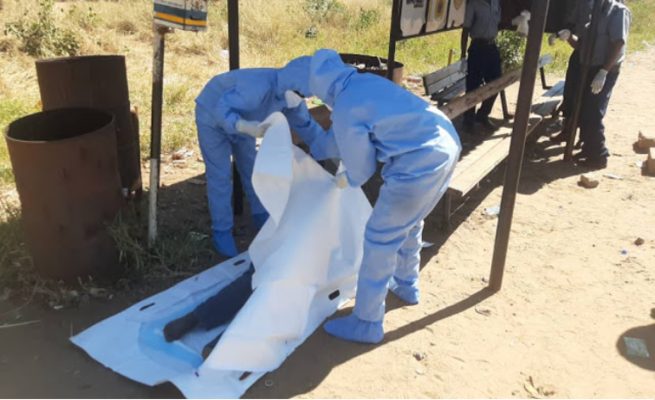 A 20-YEAR-OLD man was on Saturday found dead on the road with his intestines protruding after he was stabbed at the Queens Park shops in Bulawayo.

A passer-by stumbled upon the body and informed a barman at one of the liquor spots who then called an ambulance.

The man was pronounced dead.

Bulawayo provincial spokesperson Inspector Abednico Ncube said a report was made and police discovered that the deceased had been stabbed on the neck, nose and stomach and his intestines were protruding.

He said the suspect is yet to be identified.

Insp Ncube appealed to members of the public to solve their differences peacefully and to report all fights to the police to avoid loss of life.

“We appeal to anyone with information that may lead to the arrest of the suspect to visit any police station. Carrying dangerous weapons including knives is an offence and people should be warned,” he said.

Meanwhile another case of murder was reported last Friday at Georgia Farm in Gwanda.
Nhlanhla Sibanda (27) allegedly stabbed Mbonisi Nyathi (48) on the chest, arm and head with a sharp object following a misunderstanding.

Nyathi collapsed and died on the spot.

Insp Mangena said a misunderstanding arose over an undisclosed issue when the two were drinking beer at Phathisiwe Siziba’s home.

Insp Mangena appealed to members of the public who have any information on the whereabouts of Sibanda to report to the nearest police station.

“The public must respect the gift of life and learn to consult third parties when they have issues rather than resorting to violence,” she said.