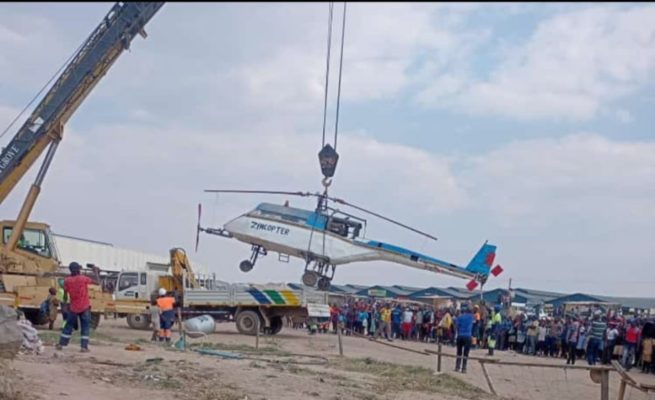 DANIEL Chingoma’s home-made chopper finally took to the “skies” yesterday, albeit by default.

Dubbed “Zimcopter” by the largely self-taught engineer, the chopper was lifted by a local contractor operating at the Mbudzi Road interchange to pave way for construction activities.

Made from scrap metal, a Lexus V8 engine with mirrors from a bakkie and a tobacco thermometer in the cockpit, the chopper has been grounded since 2003 when he made it.

The Harare City Council confirmed the development, but said it was not responsible for the lifting of the chopper.

“We heard about the issue, but we are not the ones who lifted the chopper from the site.

“The contractor is the one who removed it,” said a Harare City Council source.

Prior to the removal of the chopper, Chingoma had pleaded with the City Fathers to provide him with an alternative place to display his beloved chopper.

On Monday, Chingoma told us: “I cannot stop national development, but my appeal is for an alternative place for myself and my helicopter.

“The City of Harare has seen my invention and they were aware of the expansion of the road but never gave me an alternative place.

“I am not going to remove the helicopter or go anywhere.

“This helicopter shows my expertise and Zimbabweans are to learn more from it.

“May relevant authorities consider this invention.”

However, Chingoma’s dreams were shattered yesterday and he now needs to find a safer place to house his chopper.

The Government is turning the Mbudzi Roundabout into a massive interchange and set of flyovers and expanding Simon Mazorodze Road in its drive for improved infrastructure.