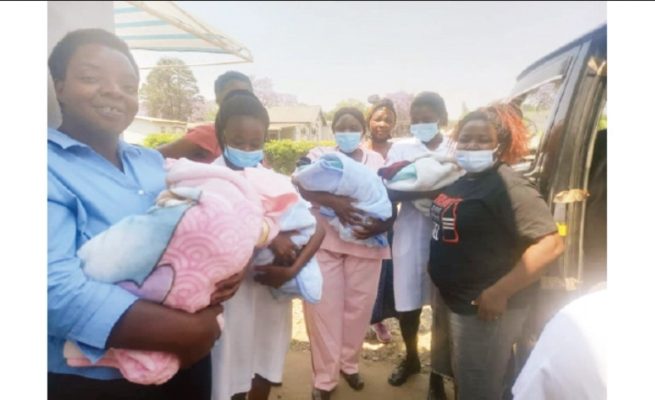 THE joy that the Zimbabwe Prison and Correctional Services officer, Patience Muchineripi (30), and her family have, has no bounds after she gave birth to quadruplets in about 50 minutes last week.

The babies, three boys and one girl, were delivered by a scheduled Caesarean section.

At around 10:35am, the cesarean operation was done after which the first baby was welcomed into the world.

In about 50 minutes, the other babies were also delivered bringing joy to Prison Officer Muchineripi, her family and friends and staff at the hospital that oversaw a successful quadruplets operation.

Muchineripi and her healthy bundles of joy were then monitored by a pediatrician as well as Dr Mukwembi from the day of delivery to yesterday when they were finally discharged.

There was joy and happiness at the hospital when the mother and her babies were seen off to their waiting vehicle by hospital medical staff, relatives, fellow workmates , friends and her husband, Anesu Mukototsi (36), also a member of the ZPCS.

Prison Officer Mukototsi took his wife and the babies to their lodgings in Kwekwe.

The quadruplets join their big sister who is 10-years-old making them five (three boys and two girls). For most couples, the birth of a baby elicits joy.

For some the birth of twins or more elicits even greater joy and gratitude but giving birth to quadruplets has given this family boundless joy.

“I am filled with boundless joy and happiness but I am tired now. Talk to my husband,” said the media shy PO Muchineripi.

Her husband could only say theirs was an extraordinary moment that turned out so well.

“We could not have asked for a better outcome. We are so thankful for all of the doctors and the nurses. We’ve had excellent care through every step of this process,” said PO Mukototsi.

He said the children were a blessing from God as they were some form of compensation since he has no siblings and was born alone before his parents passed on.

“I was the only child from my family and as fate would have it, both my parents are late. If they were here today, they would have been celebrating having five grandchildren,” said PO Mukototsi.

He said the major challenge he now faces is to do with accommodation.

“These babies need special attention and we don’t have accommodation that is enough for them. I think we will also need supplementary milk and diapers to make their life comfortable,” said PO Mukototsi.

Dr Mukwembi said the Caesarian delivery was not that difficult but said preparations for more than a single baby are a bit complex.

“The preparation is more complex than the surgery itself. Hospital preparedness and paediatrician to see the babies post Caesarean surgery itself is fairly routine,” he said.

“In this case, we have to make sure we have the right equipment and bedding for them. We had to make sure there is a special ward for them, which we did. We are happy the mother and the babies are well.”

Dr Mukwembi said it was very rare for women to have quadruplets adding that for him, it was his first time to deliver four babies.

“I have, however, done a few triplets deliveries in my career,” he said.

Dr Mukwembi said the quadruplets were delivered at about eight months so as not to put their lives and that of their mother in danger.

“So, after preparations, we started the operation and delivered the first baby at 10:35AM and in about 50 minutes, all the four children had been delivered perfectly,” he said.

The quadruplets, he said, are doing well.

“I monitored them from Wednesday until Sunday when I discharged them,” said Dr Mukwembi- a specialist gynaecologist who conducted the first ever surgery on a Covid-19 patient in the country in 2019.

PO Muchineripi’s mother, Gogo Madiwa, putting two of the babies on her lap, said the birth of her grandchildren were evidence of the existence of God.

“I have been blessed, my daughter was given these blessings and I have seen that God is there for real and today I will pray more,” she said.