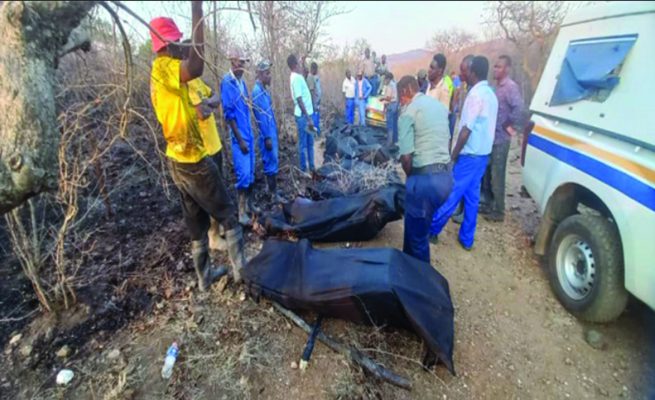 TEN people were yesterday burnt to death, some of them beyond recognition when they were trapped in a mountainous area by a raging FIRE at a farm in Esigodini, Matabeleland South province.

The veld fire which swept through the farm, later spread to areas bordering the farm.

In some cases charred remains of the victims and pieces of clothing as well as gumboots were later retrieved from the mountain.

Thick cloud of smoke and distinct odour of burnt human flesh lingered in the air.

When a Chronicle news crew arrived at the farm at around 4PM, police officers with the help of other members of the security services and farm workers were retrieving the bodies.

The veld fire according to eye witnesses started in the morning and the 10 were part of a group of 15 people who had been called to put it out.

The ten were trapped by the raging fire which was worsened by strong winds resulting in some of them being burnt beyond recognition. Four of the fire fighters escaped with burns of varying degrees.

One person however escaped unscathed. The burnt bodies were ferried to Esigodini Hospital mortuary.

One of the survivors, Mr Mhlaliswa Ngwenya who had burns on his hand and head said he owes it to God for his survival.

He said he had not option but to run through the flames to escape hence he was burnt.

“I was burnt on the arms and head. I could hear the screams of the men being consumed by the fire.

“I collapsed when I got to the dust road and that is where a man helped me up and started seeking help.”

Mr Ngwenya went to Esigodini District Hospital yesterday in the morning and was discharged in the evening. He said when they returned to the mountain that is when they found the charred bodies of his colleagues at different locations.

“What we saw was horrific. I have never seen or experienced something like that. I want to thank God, because I really survived. I didn’t think I would survive but I’m here narrating my ordeal. I’m from the hospital and my blood pressure is very high,” said Mr Ngwenya.

The owner of the farm Mr Moyo said he was left dumbfounded following the death of 10 people who were killed trying to rescue the farm and its property from the raging fire.

“When I heard about the fire and that it had killed people, I was devastated. I came and we were told that there were nine people but when we started looking around the area, we found one more body.

“People just trespass and nothing is done. They move around and even stay in your land without permission. And when such things happen no one is held accountable. We are afraid to protest, confront or say anything,” said Mr Moyo.

One of the men who retrieved the bodies, Mr Trynos Ndlovu, said it has become the norm to help each other when veld fires break out.

“When such veld fires break out, we help each other as a community and as the norm we grouped each other to fight it. These veld fires destroy our grazing land. However, this time when these people tried to help out, the fire tragedy struck.

“These are men who we saw in the morning battling to put out the fire and their death is therefore a very sad incident.It will take time for us to recover from this tragedy and loss of human lives to a veld fire,” said Mr Ndlovu.

Matabeleland South provincial police spokesperson Inspector Loveness Mangena said she had not yet received the information.

“Ten people were burnt, five of them according to the information I’m getting, beyond recognition, but the others can be identified. They are yet to be identified because their next of kin have not been informed. It is not good for the province as this tragedy has left a huge dent, especially losing lives of people in the process of putting out a fire. They were doing the right thing but something went wrong,” he said.

Last month, EMA announced that Zimbabwe is on a medium to high risk of fires amid revelations that the fire season has also been extended owing to climate change.

Communities have since been encouraged to be cautious and enforce sound fire management systems to mitigate against the impact of veld fires.