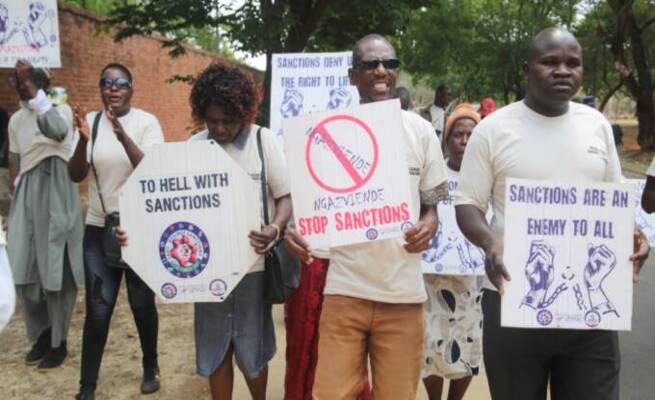 As the build-up to the Sadc Day of Solidarity Against Sanctions on Zimbabwe gathers pace, the Broad Alliance Against Sanctions today coordinated a peaceful solidarity march against sanctions at the United States Embassy in Harare.

President Mnangagwa is set to headline this year’s anti-sanctions commemorations next week which will also be observed in most African countries as progressive nations join hands in piling pressure on the United States and its Western allies to remove the illegal punitive measures.

This year’s event will be held under the theme, “Enhancing Zimbabwe’s Resilience through Economic Development and Engagement and Re-engagement”.

Speaking after a peaceful demonstration around American Embassy in Harare, Broad Alliance Against Sanctions co-founder and chair Mr Calvern Chitsunge said Western countries should let Zimbabwe lead its own path as a sovereign nation.

The team is now clocking almost three years camped at the American embassy pushing for the unconditional removal of sanctions against Zimbabwe.

“We are going nowhere until sanctions are removed. We will mount pressure on daily, weekly, monthly and annual basis until the embargo is lifted,” he said.

Sadc declared October 25 as the Day of Solidarity Against Sanctions on Zimbabwe.

This year, the campaign is coming on the backdrop of growing calls for the removal of the illegal sanctions that were imposed as punishment for the land reform programme to be unconditionally removed.