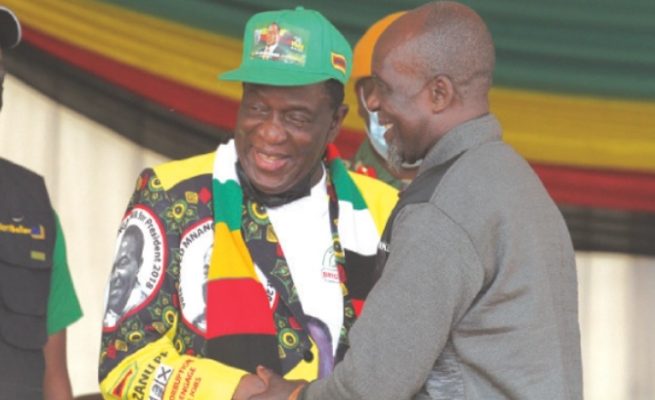 He did not see it coming but he never lost hope.

As a man who claims that he has a blueprint and a vision for the country’s future, his dream was to meet President Mnangagwa to deliver a message from God.

Musician-cum-politician, Hosiah Chipanga’s dream to meet the President finally came true after he came face-to-face with the country’s First Citizen in Mutasa last week on Saturday.

The President was addressing thousands of Zanu PF supporters at Beaulieu Primary School during victory celebrations for Advocate Misheck Mugadza who won the Mutasa South National Assembly seat during the March 26 by-elections.

Artistes such as Baba Harare, Peter Moyo and Simon Muchita, among others, also got the opportunity to meet the President.

However, Chipanga was the happiest of them all.

It was a golden moment for him.

Speaking after the event, Chipanga said meeting the man steering the country’s affairs was an opportunity of a lifetime.

The 70-year-old musician, who is also the leader of the Patriotic Zimbabwe political party, said he is ready to contest in next year’s harmonised elections.

He said he was honoured for being selected to be among those who entertained thousands of people at the event.

“Mwari vakapindira (God has intervened). This is the greatest day of my life. It is not a secret that I longed for this day. I waited for so many years to meet President Mnangagwa.

“It is only God who has made it possible and I am forever grateful. It was God’s time.

“Although we did not have much time to talk, this was a mission accomplished. One of the reasons I formed a political party was to ensure that my messages would be heard by the people and the President.

“Years back, it was not easy to get such an opportunity.

“Besides being a social commentator who conveys messages through music, I believe being a politician has made me a sought after musician. I managed to talk to him and I am convinced that he is a listening President,” said Chipanga.

During his perfomance, Chipanga belted out the plug track “Diabetes”, drawn from his yet-to-be-released album, “Denga Idzva Nenyika Itsva”; as well as “Vatsigiri Vangu”, a dedication to those who have stood with him through thick and thin.