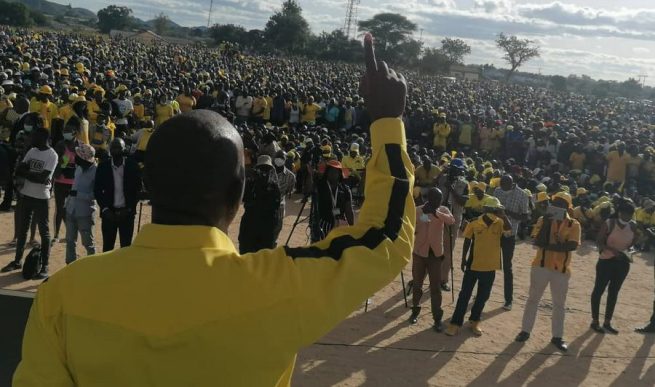 The ruling Zanu PF party has been alarmed by the inroads being made by opposition Citizens Coalition for Change (CCC) in the rural areas and fears the influence of electoral non-governmental organisations on the rural voters.

This was revealed in the ruling party’s central committee report released at its 7th National People’s Congress which ended at the weekend.

The report also exposes that Zanu PF fears that electoral watchdogs such as the Zimbabwe Election Support Network (Zesn) and the Election Resource Centre (ERC) could conduct parallel voter tabulation in general elections expected next year, which could result in election outcomes being released before the Zimbabwe Electoral Commission (Zec) does so.

This, Zanu PF said, could lead to “mayhem”.

The central committee (CC) said to counter this, there was need for the ruling party to strengthen its strategies to gain victory in the 2023 elections.

Despite losing in some wards in recent by-elections, CCC’s competitiveness in the rural areas irked Zanu PF, which resorted to violence in some parts of Matabeleland last week (Matobo and Insiza) to thwart opposition victory.

“On the other hand, Zimbabwe Election Support Network (Zesn) and the Election Resource Centre (ERC) are planning to conduct parallel voter tabulation during the 2023 harmonised elections,” the report read.

“In pursuit of that, they will deploy election observers at all polling stations that will also double as CCC election agents. These will send results to their established command centres and have consolidated results before Zec announces. If Zec announces what is different from what they have, they are planning to start violent protests. This plan is a recipe for chaos, mayhem as well as a serious security threat.”

The report emphasised the need for the ruling party to up its game as it had observed waning support in the rural areas, which are perceived to be its stronghold.

The report also accused some non-governmental organisations of funding the opposition.

The congress endorsed President Emmerson Mnangagwa as its candidate in next year’s elections.

Mnangagwa will likely face off against bitter rival, Chamisa, in next year’s polls for the second time following the disputed 2018 polls which polarised the country.

“The same organisations are sponsoring the ‘Defend Your Vote’ operation where all CCC members will vote and remain at polling centres until results are announced, awaiting further instructions from their leadership. As the nation heads towards the 2023 general elections, there is a need to enhance physical security at all Zanu PF premises countrywide. There is also a need for the party to increase visibility in rural areas in order to safeguard the party’s rural vote,” the report read.

“The ruling party needs to cause the government to improve and maintain the social and economic situation/stability in the country to ensure that the citizens continue to have confidence in the Zanu PF party. The loss of two wards in the Bulilima constituency in Matabeleland South province to the opposition Citizens Coalition for Change raised the need for the party to jealously safeguard its territories and to desist from complacency.”

In response to Zanu PF’s assertions, CCC deputy spokesperson Gift (Ostallos Siziba) said it was clear that the regime would try to disrupt anything that enhances the credibility, transparency and openness of next year’s polls.

“The manipulation includes violence, ballot staffing and alteration of figures. If there are individuals and stakeholders who seek to announce the results before Zec does, then they should face the law when the time comes. Otherwise the presence of election agents at polling centres is a Constitutional provision that permits political parties to have them,” Siziba said.

“Such claims are worrisome. We are a legitimate electoral watchdog. That we intend to do parallel voter tabulation and cause violence is false. ERC does not mobilise people for violence. We mobilise the electorate to participate in peaceful, free and fair elections. We are election observers and those allegations are fictitious. We do not work in favour of any political party,” Bobosibunu said.

Efforts to get a comment from Zesn executive director Andrew Makoni were fruitless as his phone was not reachable.

Meanwhile, the central committee report also said the ruling party had resolved to scale up its social media campaigns, and boasted of growing numbers of followers on platforms such as Twitter, and Facebook.

“By the time of preparing this report, the Twitter page had reached 126 000 followers and our target is to reach 500 000 by 2023. The Facebook page was at 17 000 (followers) but by the time of submission of this report, it had grown to 48 000 followers. The department has been able to reach out to a wide range of people through its social media pages on Facebook and Twitter as well as the party website. We have managed to compete with other players effectively on social media platforms.

“However, more needs to be done ahead of the 2023 general elections to ensure the party effectively harnesses social media for mobilisation,” the report read.