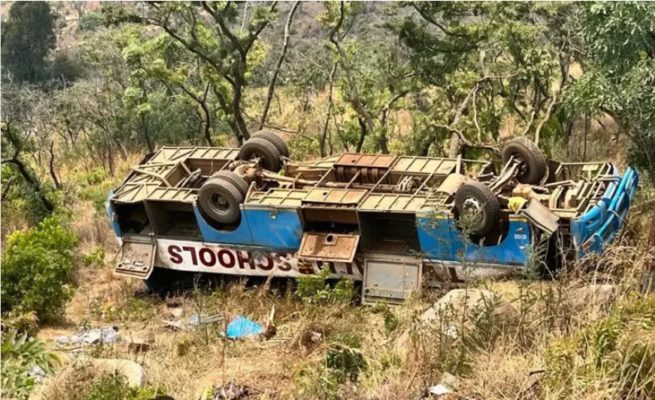 THE arrested driver of the Tynwald High School bus that overturned in Nyanga on October 14, claiming seven lives, appeared in court in Nyanga on Thursday and was remanded in custody.

Chamunorwa Machimbidzofa (44) of Westlea, Harare, was playing hide-and-seek with law enforcement agents following the accident which claimed the lives of six learners on the spot and a Geography teacher who succumbed to injuries sustained in the accident this week.

Machimbidzofa was finally arrested this week and was not asked to plead to culpable homicide charges when he appeared before Nyanga magistrate, Ms Notebulgar Muchineripi. He was remanded in custody to November 17.

Appearing for the State, Mr Cuthbert Bhosha said: “On October 14, along the Rusape-Nyanga Road, Machimbidzofa was driving a Zhong Tong bus carrying 45 passengers on board. Upon approaching the 75km peg, Machimbidzofa failed to negotiate a curve and lost control of the bus.

“The bus then veered off the road and overturned several times before landing on its roof. This resulted in seven passengers being killed, while 39 others were injured. The Vehicle Inspection Department from Rusape was called to inspect the bus and compiled a report.

“The traffic accident evaluator was also called to the scene and compiled a report.

“Findings show that Machimbidzofa drove the bus negligently by travelling at an excessive speed under the circumstances, failing to keep a proper look out of the road ahead, failing to keep the vehicle under proper control and failing to stop or act in a reasonable way when the accident seemed imminent.”