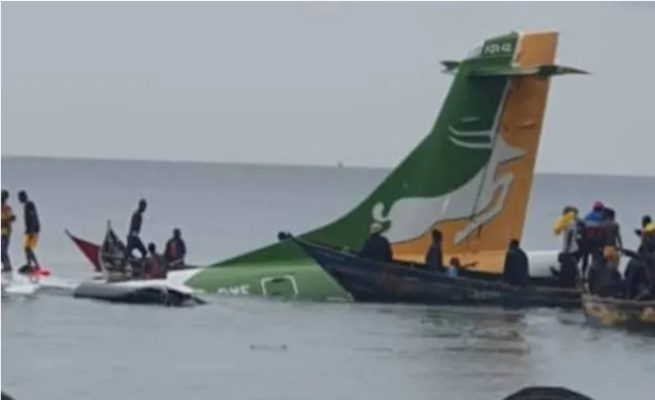 At least 19 people have died after a plane plunged into Lake Victoria in Tanzania during bad weather shortly before it was due to land in the north-west city of Bukoba, according to the state-owned Tanzania Broadcasting Corporation.

“There was an accident involving a Precision Air plane which … crashed into water about 100 metres from the airport,” the regional police commander William Mwampaghale told reporters at Bukoba airport.

“As we speak, we have managed to rescue 26 people who were taken to our referral hospital,” Chalamila said.

“The rescue operation is still ongoing and we are communicating with the pilots,” he said, adding that the aircraft was an ATR-42, manufactured by the Toulouse-based Franco-Italian firm ATR.

The two pilots were reported to have been seriously injured. No details of the cause of the crash have been made public.

“We were really shocked,” Abdul Nuri told the BBC.

“People panicked and some started crying and shouting … At the arrivals gate people panicked as well – most of them were waiting to welcome their relatives.”

Fishers are thought to have been the first to reach the aircraft and helped some passengers escape through a rear door.

“The rescue team has been dispatched to the scene and more information will be released in two hours’ time,” the airline said.

Emergency workers attempted to lift the aircraft out of the water using ropes and assisted by cranes as local residents also sought to help in the effort.

The president, Samia Suluhu Hassan, expressed her condolences to those affected by the accident. “Let’s continue to be calm while the rescue operation continues as we pray to God to help us,” she said on Twitter.

“Our hearts and prayers go to the families of passengers onboard a plane that crashed into Lake Victoria, with our full solidarity to the government & people of Tanzania,” Mahamat said on Twitter.

“The East African Community joins and sends our condolences to Mama Samia Suluhu Hassan, families and friends of all those who were affected by the Precision Air plane accident,” Mathuki tweeted.

Precision Air, which is partly owned by Kenya Airways, was founded in 1993 and operates domestic and regional flights as well as private charters to popular tourist destinations such as the Serengeti national park and the Zanzibar archipelago.

The incident comes five years after 11 people died when a plane belonging to the safari company Coastal Aviation crashed in northern Tanzania.