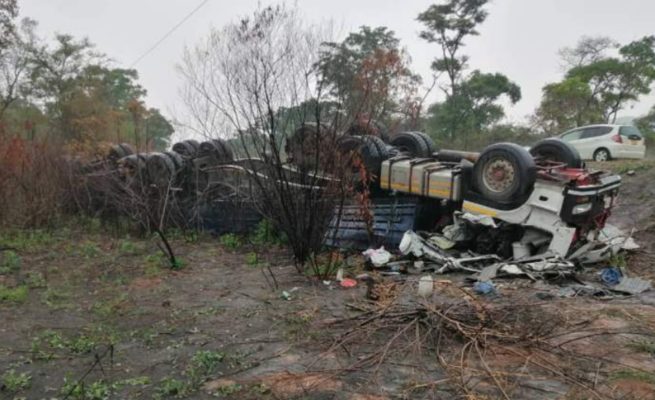 THERE was drama at the funeral of one of the six victims of the Mazowe Road accident, Charity Chikuku, in Glen View 4 on Tuesday.

Her in-laws accused her of infidelity.

Chikuku, who was married to Earnest Takawira, was buried at her parents’ village in Mutoko.

Chikuku died together with her married friend Ruth Bandawe, who had accompanied her on their escapade to Mozambique.

Four pedestrians also died when the driver of the haulage truck failed to negotiate a curve along the Harare-Mukumbura Road last Friday.

A source told H-Metro that Chikuku left home saying she was going to visit relatives in Mazowe, only for her to embark on a tour of Mozambique, with her haulage truck driver lover.

“Charity had been sleeping with the cross-border truck driver, who was injured in the accident,” said the source.

“Voices were raised as harsh words were exchanged between the two families as they argued about where Charity should be buried.

“Charity’s parents refused and took the body to Mutoko.

“Her parents were shamed and mocked throughout the funeral wake at her husband’s place in Glen View 4.”

Chikuku is reported to have asked Bandawe to accompany the lovers to Mozambique.

Bandawe was married to Mutizwa Takawira (no relation to Earnest).

Mutizwa told H-Metro that Bandawe’s handbag was found in another haulage truck.

“My wife left home saying she was going to Mozambique to buy goods for resale,” said Mutizwa.

“What shocked us was that her handbag was found in another haulage truck, among three trucks, belonging to the same company which were following each other.

“How her handbag came to be in another haulage truck, which was not involved in the accident, remains a mystery.

“Isu we laid Ruth to rest at Granville Cemetery on Tuesday,” he said.