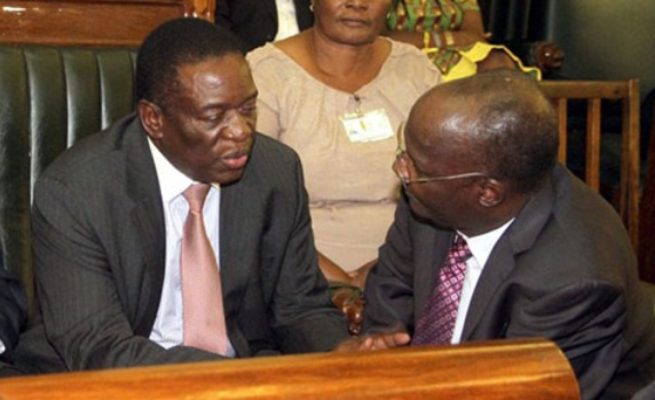 In an open letter to Zanu PF members, seen by ZimLive, the duo – ousted during a military coup that toppled Mugabe in 2017 – insisted that there was never a danger of them joining President Emmerson Mnangagwa’s rival Nelson Chamisa, the leader of the Citizens Coalition for Change.

The letter fell short of requesting to rejoin the party.

“Between 2018 and 2020 – on the back of the 15 November 2017 military coup that ousted President Mugabe and his government from power and violently targeted us and other comrades linked with the so-called G40 – we associated ourselves and used the hashtag ‘Zanu PF Must Go (#ZanuPFMustGo), in our public messaging and communication,” wrote the former Zanu PF loyalists.

“Accordingly and on this day 15 November 2022, we hereby apologise to all of you Comrades most sincerely and with profound regret for our wrong use of – and ill-advised association with – the hashtag ‘Zanu PG Must Go’ (#ZanuPFMustGo),”

Moyo and Zhuwao said the violence that was targeted at them as the military seized control of government still did not justify their demands for Zanu PF to go.

Said the exiled pair, “While it is common cause that the protracted public differences we had with other leaders in the party and the government became irreconcilable to the point where military force was used to target us with our families, and to overthrow the late former President Robert Mugabe and his government; and whereas that use of military force was unconstitutional and set a dangerous governance precedence in the country and elsewhere across the continent, we have come to the full realization and conclusion that those unfortunate developments and their tormenting consequences on us did not – and do not – justify our use of and association with the hashtag ‘Zanu PF Must Go’(#ZanuPFMustGo); which clearly targeted not those who have tormented us but also all of you, as members of Zanu PF.”

The politicians said at no time did they seek to join the opposition led by President Emmerson Mnangagwa’s rival Nelson Chamisa.

“For whatever it is worth, we supported Nelson Chamisa in the 2018 and well after that but we did not at any time in that process ever seek to join his then MDC-A or his new CCC,” the pair said.

“As President Mugabe best put it ahead of the 2018 harmonised general election, ‘there was no one else to support’ given the political dynamics at play at the time.

“We hoped in vain that Chamisa would break barriers and forge a new platform on which a cross section of citizens straddling the political divide could converge, based on Zimbabwe’s founding values and principles stipulated in section 3 of Zimbabwe’s constitution.”

Since the coup, Moyo has been holed up in Kenya while Zhuwao lives in South Africa.