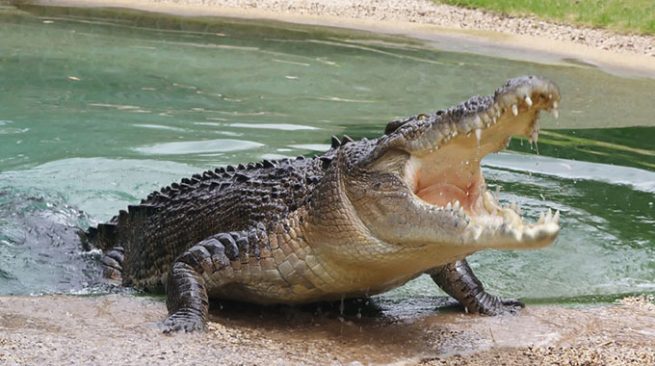 A 13-YEAR-OLD boy from Checheche bravely fought a giant crocodile with bare hands after it had attacked him while he was crossing Save River with his friends recently.

Danmore Gwenzi escaped from the jaws of death after the reptile had clutched his thigh.

He poked his hand into the mouth of the crocodile and it let loose its grip.

However, he lost a chunk of his flesh in the process.

While he was battling with the crocodile, his friends ran for dear life as they screamed for help.

Villagers rushed to the scene, only to see Danmore already on the riverbank.

He was rushed to St Peter’s Hospital in Chisumbanje where he was admitted.

The Manica Post caught up with Danmore and his mother while he was recuperating at the hospital.

Said the boy: “We were crossing the Save River with my friends. The water was ankle high and we thought no crocodiles would be lurking there. As we were about to reach the riverbank, the crocodile suddenly latched on me. It grabbed me on the thigh and I gathered some courage and poked my hand into its mouth.

“The crocodile loosened its grip and I managed to wobble to safety. Other villagers then came to my rescue,” said Danmore.

His mother, Mrs Marita Gwenzi chipped in: “My son had a brush with death. I am happy he managed to survive. Danmore needs to be stitched and have a skin graft on his thigh. However, we are struggling to pay the bills.”

Last week, Cabinet adopted the establishment of a relief fund to cushion victims of human-wildlife conflicts.

The fund will cater for hospital and funeral expenses for victims such conflicts.

The measures include conservation education in the use of barriers, translocation, sterilisation and selective culling of wildlife, as well as approved hunting quotas and fencing to restrict or control the movement of wildlife.

“Cabinet wishes to highlight that as a result of its successful conservation programmes, the country’s increasing human and wildlife populations have led to competition for limited resources between humans and animals,” said Minister Mutsvangwa.

“Cabinet adopted the establishment of a relief fund to cushion the victims of human-wildlife conflict by way of funeral assistance and an amount paid towards hospitalisation and treatment with a set limit,” said Minister Mutsvangwa.

“The payments will cover three categories: death, maiming, and injuries. A specialised human-wildlife conflict unit will be established under ZimParks.

“The fund is based on a self-financing model where proceeds from hunting and crowd funding activities will be mobilised to resource the fund.

“These sources include reserving a hunting quota under the CITES granted quota, and a levy on hunting revenue accruing to safari operators, rural district councils and conservancy owners,” she said.

Going forward, the fund will be extended to include providing water in the game parks and enhancing pastures.

The fund will also look at associated impacts such as livestock loss and the control of animal movements to curtail the spread of their diseases.

Treasury will fund the programme.