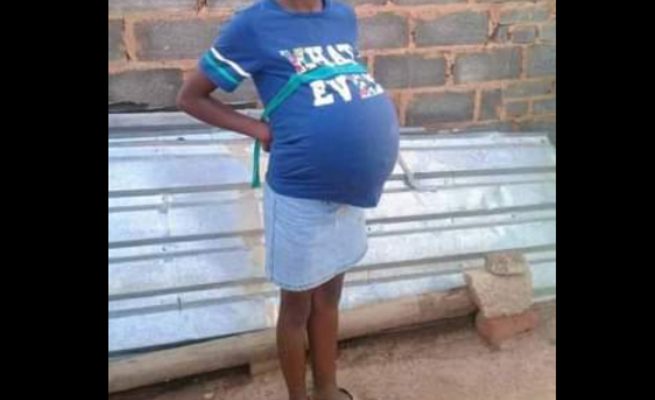 In a space of a month, Zimbabweans have woken up to two bizarre cases of child s_əxual abuse.

A nine-year-old girl from Tsholotsho last week became the youngest mother in the country after giving birth to a baby girl at the United Bulawayo Hospitals through caesarean section (C-section).

Barely days before people could make sense of this graphic case of s_əxual perversion, they received news that police had arrested two 17-year-old boys for impreg_nating a nine-year-old girl in Bindura.

The victim, a Grade Three learner, is presently at Bindura Hospital.

A month ago, a 15-year-old girl from Norton died while giving birth at a church shrine in Bikita.

The tragedy is reminiscent of the case of 14-year-old Anna Machaya, who died while giving birth in Marange in July last year. This is just a tip of the iceberg.

Police are worried that the incidents have also become pervasive in towns and cities.

“We cannot currently provide statistics, but there is a worrying spike in such cases (child preg_nancies) coming through our Victim Friendly Unit (VFU),” said police spokesperson Assistant Commissioner Paul Nyathi.

“In the past, we had more cases in remote areas, but, of late, even in towns, the cases are alarming, so, parents need to do more in safeguarding their children.”

According to the Zimbabwe Prisons and Correctional Service, at least 124 offenders were jailed between January and June 2020 for child s_əxual abuse.

The figure exponentially rose to more than 600 in the comparative period last year.

To protect minors, the legal age of consent for s_əx for girls has been adjusted from 16 to 18 years.

The Government is also strengthening child protection co-ordination at district and community levels to provide a multi-sectoral safety net for minors.

“We are concerned about the violation of children’s rights and the increasing levels of abuse across the country. This case in particular (nine-year-old mother) is horrific and shows how deep the scourge of violence against children has gone,” Public Service, Labour and Social Welfare Minister Professor Paul Mavima told The Sunday Mail Society.

“It (violence against children) robs children of a happy childhood and creates an unsafe environment for them. A child belongs to everyone. Child protection requires collective action. Let us not wait for the worst to happen. I urge the nation to promptly report all cases of children at risk of abuse.”

The Ministry of Public Service, Labour and Social Welfare, he said, is working with other relevant departments to offer specialist child protection services and therapy for the nine-year-old mother.

“Her safety is of paramount importance. As such, the process of reunification is already underway as it follows a well-structured and systematic plan that puts the best interests of the child at the fore.

“This entails assessing the preparedness of both the family and community for reintegration. Post-reintegration support will also be provided to the child,” he added.

Zimbabwe has a comprehensive legislative framework for protecting children against abuse. Section 81 of the Constitution outlines a Bill of Rights for children.

Furthermore, the Marriages Act (Chapter 5:15) outlaws and criminalises child marriage in any form, including by coercion and pledging.

The Children’s Act (Chapter 5:06) also criminalises neglect, and defines the parameters of children in need of care, who include survivors of s_əxual violence and abuse.

However, the authorities say late reporting of cases, tampering with evidence and attempting to conceal evidence are making it increasingly difficult for survivors to access justice.

“The ministry has initiated the process of consolidating the various parenting initiatives that were being implemented in a fragmented approach by different private voluntary organisations.

“The aim is to develop a National Parenting Programme as provided for in the proposed Children’s Amendment Bill. Implementation of the different parenting initiatives is, however, ongoing in various selected areas,” said Minister Mavima.

The Children’s Amendment Bill is part of the Government’s strategy to protect children.

When passed, the revised law will address various gaps to ensure effective implementation of provisions of the Constitution and commitments made to the United Nations Convention on the Rights of the Child and the African Charter on the Rights and Welfare of the Child, among others.

The Children’s Amendment Bill has since passed through the Lower House of the National Assembly and is now under consideration in the Upper House.

It is being jointly considered with the Child Justice Bill, as the two pieces of legislation complement each other in ensuring the comprehensive protection of children.

“This scourge (violence against children) requires an all-stakeholder approach which focuses more on awareness and prevention, as well as timely response. We are committed as a ministry to lead in this vicious fight against perpetrators of child abuse,” said Minister Mavima.

Most of the cases are walk-ins and tip-offs.

GPSSD co-ordinator Ruvimbo Muchandibaya said the victims are taken through the referral pathway, in which they are assisted to make a report with the police’s VFU.

“After that, they go through a medical examination with our assistance and, thereafter, they get some psychosocial support,” she said.

In some cases, the entire family also has to go through psychosocial support sessions. The survivors are also mentally prepared for court. They undergo pre-trial counselling before being accompanied to court.

However, some children’s rights advocacy groups feel existing laws are not deterrent enough. They are also calling for an all-hands-on-deck approach in dealing with the scourge.

“The situation is now out of hand because some, if not most, of the offenders never get caught. The community is no longer safe. The authorities alone cannot champion this. We should act and push to get solutions from the very communities where this is happening,” argued HIV/AIDS advocate Tariro Kutadza.

Issues of child s_əxual abuse, she added, are also exposing victims to HIV/AIDS.

Religious and traditional leaders promoting their beliefs have been identified as some of the major drivers of child abuse.

“Some are doing this in the name of kuromba to escape poverty,” said Ms Kutadza.

“In most situations, cases are not reported or they are dealt with within the family, as the perpetrators are often breadwinners. In other cases, women are forced to conceal the information to preserve their marriages,” she said.

Nyamapfene urged the Government to set up structures that protect survivors in case the breadwinner is arrested.

This, she notes, will give victims and their families confidence to seek justice.

The Ministry of Primary and Secondary Education has sent teams to the different provinces to assess the situation.

The teams are also educating learners on aspects related to child abuse.

The ministry’s communications and advocacy director, Taungana Ndoro, said their aim is for learners to understand s_əxual abuse and be able to safeguard themselves.

Preliminary findings, he said, indicate that boys are also victims.

“What is disturbing is that some of these children do not open up or they take it to be normal; they go on to teach others. It is sad that in some cases, they actually ‘violate’ each other in their respective age groups, and we have realised that the problems are actually in their families and communities,” said Mr Ndoro.

The ministry is setting up health committees in schools, while guidance and counselling is being revived.

“However, we still feel, if we are to champion this, communities need to be involved in all our programmes and also be enlightened on how best to be vigilant.”

“Therapy will help them deal with the trauma of rape and the negative emotions it comes with. While many people around the child may mean well, not everyone is trained to deal with such cases. The remedy lies in the therapeutic interventions and techniques employed by the professionals,” she said.

“The education sector needs to create vacancies for specialists in schools. These will help identify cases of child abuse.”