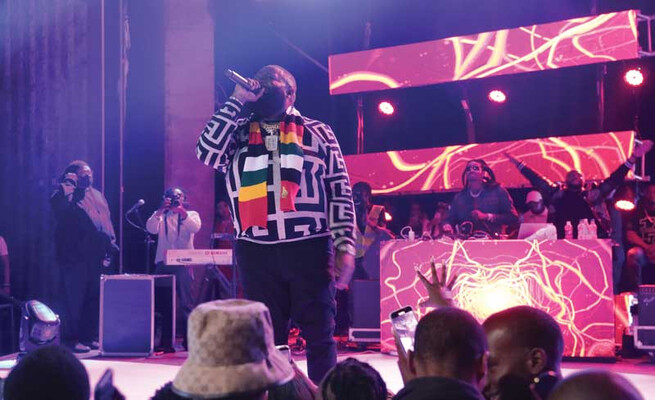 MANY die-hard local hip-hop fans who had expected to witness and experience a concert of their lives during American rapper Rick Ross’ maiden performance in Zimbabwe on Friday were left disappointed after they were forced to leave the Harare International Conference Centre before he could take to the stage.

From the concert’s programme that was publicised and shared to the artistes, and other VIP guests, Rick Ross was supposed to come on the stage at 11pm, but he only came after the concert day, at midnight and performed for a less than an hour.

The Hustlin hitmaker came on stage before local artistes after frustrated fans threw missiles in protest over the delayed coming of artistes on the stage.

Panicked concert organisers were forced to bring Ross to salvage the situation.

The show was supposed to start at 5pm with a red-carpet show featuring locals, Ace Forever, Hillzy, Kikky Badass, Saintflow and Raydizz.

The programme showed that for the main stage, wheelspinner King Her was to take to the stage at 7pm while Holy Ten would be on stage at 7:30 and then leave it for DJ Madeherbelieve.

Award-winning Takura was billed to perform at 8:30 before the coming of South African rapper Nasty C who was supposed to have taken to the stage at 9:30pm.

Dancehall singer Nutty O, who later decided not to perform for a handful of audience around 3am, was scheduled to have performed as the last supporting act before Rick Ross took to the stage at 11pm.

To his credit, Ross calmed the situation with a masterful performance, making a grand entrance, by emerging from stage smokes like a phoenix.

As he took to the stage, the venue vibrated to the echoes of his 2010 hit song The Boss, a track that perfectly captured his aura before he went on to belt his yesteryear and recent hits.

His playlist included Hustlin, Pop That, John, God Did and Stay Schemin, among others.

To strengthen his moniker The Boss as he is popularly referred to by his legions of fans, Rick Ross came to the stage holding the Belaire Bleu, a unique bottle design and spectacular sapphire colour, inspired by the mystical blue waters of the French Riviera in Côte dazur.

In the other hand he was holding a cigarette which he went on to smoke on stage before handing over the Belaire Bleu to a lucky fan.

During his set, Rick Ross paid tribute to the late Takeoff, a member of the famous Migos group who died earlier this month and the legendary American rapper, the Notorious BIG.

The stellar performance could not make up for the poor planning of a show publicised as “the biggest show of the year” where the ordinary ticket was pegged for US$35 while the VVIP packaged ticket was sold for US$5 000.

As Rick Ross ended his performance, he left with several fans who were heading for the after-party held at Karma Club in Chisipite, Harare.

The show was attended by high profile people from the government, politicians and showbiz circles who included big spenders Wicknell Chivayo, Scott Sakupwanya, Mike Chimombe, Emmerson Mnangagwa Jnr, among others.