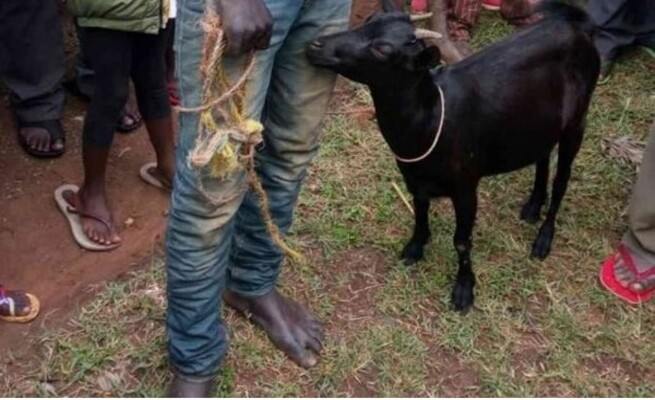 A 25-year-old h0rny man from Madhibha Village under Headman Chaka in Chief Chirumhanzu’s area has been arraigned before Chivhu Magistrate, Ayah Kagwere for alleged bestiality with a goat of his neighbour.

Anymore Chipara (25) was allegedly caught in the act with his neighbour Haruperi Manjovha (53)’s goat.

Prosecutor Flossie Chigudu told the court that on November 18, 2022 at 3:30 am at Mapiye Village, Headman Chaka, Manjovha who was asleep in her bedroom heard her goat making srtrange noises at the pen.

She went outside to check and was shocked to find Chipara in an act with her female goat.

The complainant tiptoed towards Chipara and grabbed him by the neck. The accused wrestled the complainant and Manjovha shouted for help and villagers came out and apprehended the accused.

Magistrate Kagwere sentenced Chipara to 6 months imprisonment and three months were suspended on condition that he does not commit a similar offence in the next five years.

The accused will effectively serve three months in jail.