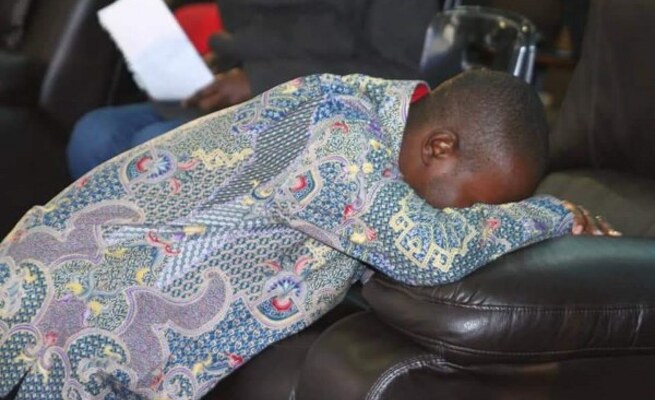 CCC leader Mr Nelson Chamisa faces open revolt from his party legislators after he tried to stop them from receiving a US$40 000 Government loan through a populist announcement on social media.

Mr Chamisa, whose party is fractured as the country prepares for the 2023 harmonised elections, has been at odds with his lieutenants over his alleged heavy-handedness, and refusal to come up with structures that could guarantee their political survival.

This has prompted other party top officials to abandon projects they have been carrying out in their different constituencies and rural areas.

Just yesterday, an irate CCC secretary-general Mr Chalton Hwende expressed frustration on social media at the manner in which the party business is conducted.

“Yesterday (Saturday), I addressed a ward meeting of CCC volunteers in Mhondoro. We prefer smaller meetings to counter victimisation. This is probably my last meeting. I have noticed the negative comments from our CCC citizens on Twitter whenever I go on Mgwazo in Mhondoro.

“I have also considered the stress and anguish which most of the comments cause to my teenage kids. The reason I agreed to help in Mhondoro was to assist in growing the rural vote. I did 38 weekend meetings this year funding myself & abandoning my work at my logistics company.

“As a leader in the movement, I have a responsibility to take into account the negative comments on Twitter and also self-introspect. I will use the December Holiday to do exactly that. I love my Citizens movement, the CCC, and will continue contributing in other areas,” said Mr Hwende.

While some are openly expressing their dismay over the party’s lack of structures and the blind loyalty towards Mr Chamisa, some in hushed tones have reportedly proceeded with the processes required to acquire the US$40 000 loan facility.

Insiders yesterday said some legislators from CCC have already received their loans and are not to be swayed by Mr Chamisa who said on Twitter last week: “I have told them that if you do not act accordingly, you know what it means, the citizens are waiting for you, and they are going to punish you and punish you happily . . . To call it a loan is to be very nice; this is a bribe disguised as a loan, a donkey is a donkey, you cannot call a lion a cat”.

A livid CCC legislator yesterday dismissed Mr Chamisa’s threats as empty thunder, “because he is receiving donations from well-wishers every day, but the money is not accounted for because there is no accountability in the party”.

Allies have been deserting Mr Chamisa en masse with Professor Jonathan Moyo, who publicly backed him in 2018, denouncing him as “immature”.

In a recent interview with News24, a South African news portal, Prof Moyo said his public, and thus open support, for Nelson Chamisa did not rise to the broad based coalition they expected and, worse, it was not reciprocated but attracted intolerable demonisation which even dragged in family members who were gratuitously maligned, including his late daughter.

“As far as we are concerned the relevant, substantive and meaningful debate on Zimbabwe’s national question and economic prosperity based on the inclusive values and principles of the country’s liberation struggle and national independence has remained among and between Zanu PF members. The rest is mahumbwe (child’s play),” said Prof Moyo.

“Nelson Chamisa and his base publicly proved to be unworthy of the kind of support we gave them.

“We now know first-hand that they’re immature, ideologically bankrupt and anti-the nationalist project. They want power just for its own sake, on behalf of their handlers and funders.”