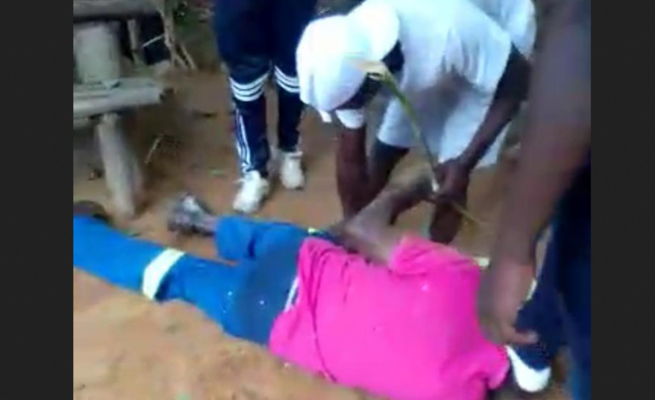 Elderly Citizens Coalition for Change (CCC) members who were assaulted by suspected Zanu PF activists for supporting the opposition were forced to spend the night in the mountains fearing for their lives, it has emerged.

The violence occurred in Chirowa Village, Murewa North in Mashonaland East and was exposed through social media.

Police have arrested suspects in connection with the assault that has attracted widespread condemnation.

In separate interviews with Zeem TV, an online television station, the victims described the attack as brutal and unprovoked.

“We were harassed and we fled and slept in the mountains. It rained all night and we had to endure the downpour,” Chikoti

“By dawn we rushed home and had a bath before rushing to Murewa police station.

“It was a painful experience and if I show you our scars you may realise the magnitude of the torture.

“What’s most painful is the fact that we were beaten by children some the age of our grandchildren.”

She added: “We are yet to meet our children and grandchildren, but I know they will not be happy to learn what we have gone through.

“I encourage the youths to register to vote and push for change so that things will be better for us.”

Morris Seremani said: “They broke my phone, held me down while someone was stamping on my head.”

Seremani said he is being excluded from benefits in the area because of his support for the opposition.

“I do not get any inputs. I always have to wrestle for my own share. I am a victim because of my political affiliation,” he said.

“I encourage the youths not to be used for other people’s political gains.

“I pray that CCC rises to the occasion and wins this year’s elections.”

He said he was going to remain a staunch CCC supporter and would never desert his home because of politics.

Zanu PF has distanced themselves from the assault with Mashonaland East provincial chairperson Daniel Garwe who is also Housing minister saying he was deeply pained by the reports.

Opposition parties, the clergy and human rights organisations have expressed alarm over the rising cases of political violence as the country heads for the 2023 elections.

Last week, the Zimbabwe Council of Churches (ZCC) called on political parties to respect the sanctity of life ahead of the country’s watershed elections amid fears the plebiscite could turn violent.

ZCC said the church was concerned with the inhumane treatment and serious injury caused to the elderly CCC members.

“This recent incident, while seemingly isolated, signals the deepening and intensification of systemic political violence and intimidation as we approach the 2023 elections,” ZCC said in a statement.

“We call for the convening of an urgent all stakeholders national peace conference where we take stock of the national peace infrastructure, and all political parties sign an election peace pact prepared by the church working with Chapter 12 commissions.”

News Cynthia Goba - 3 February 2023 0
WHAT would you do if a person who almost wrecked your mɑrriɑgǝ lies that they have your baby and you are forced to maintain...

News Cynthia Goba - 3 February 2023 0
A 38-YEAR-OLD man from Bulawayo has been fined $9 000 after threatening to kill his wife over undercooked isitshwala (imboza). True to the “hungry man...

Videos & Pics Sekai Moyo - 3 February 2023 0
The Zimbabwean embassy in South Africa is expected to launch a mapping exercise for the return of Zimbabwean Exemption Permit (ZEP) holders. About 180 000...

59-year-old man rɑpǝs 9-year-old granddaughter, buys her silence with US$20

News Muza Mpofu - 3 February 2023 0
A 59-YEAR-OLD man from Kingsdale in Bulawayo has appeared in court for allegedly rɑp!ng his nine-year-old granddaughter after the two were left alone at...

Birthday celebrations end in tears as woman loses iPhone & US$125 after bhinya pounced...

News Muza Mpofu - 3 February 2023 0
A WOMAN who was celebrating her birthday at Bulawayo’s Hillside Dams was reduced to tears after a knife wielding man grabbed her by her...

News Cynthia Goba - 3 February 2023 0
A W0MAN who was queuing at a bank in the city centre nearly jumped out of her skin when she felt something hard and...

News Muza Mpofu - 3 February 2023 0
An assistant artisan went to court accusing his ex-girlfriend of physically and emotionally abusing him. Maxwell Joe applied for a protection order against his ex-girlfriend,...