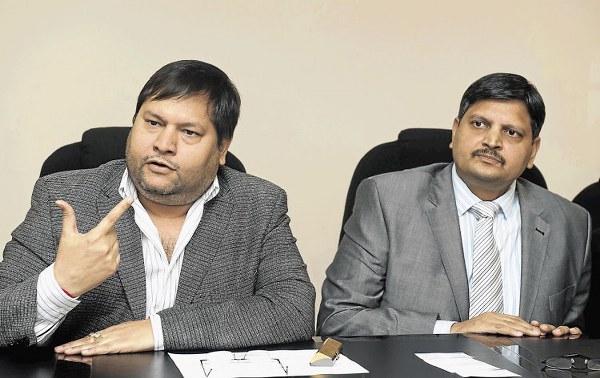 Negotiations into a multi-million dollar deal to recapitalise the moribund National Railways of Zimbabwe (NRZ) are dogged by fears that South Africa’s ill-famed billionaire family, the Guptas, could make inroads into the Zimbabwean market through their relationship with Transnet, a key player in the transaction.

Transnet, in collaboration with the Diaspora Infrastructure Development Group, has won the tender for the rehabilitation of NRZ’s antiquated machinery.

In October, government gave parties to the deal the nod to tie loose ends before consummating the transaction.

Eighty bidders were in the running for the project.

The fact that two companies linked to the Guptas — Turgeta and T-Sytems — are the biggest trading partners of Transnet is causing anxious moments on the part of the new government which has adopted zero tolerance towards corruption.

The Guptas’ close ties to South African President Jacob Zuma and the hullabaloo over their opaque business practices has unnerved some bureaucrats in President Emmerson Mnangagwa’s government.

While it is not immediately clear if Transnet would rope in businesses linked to the Guptas in executing the project, enquiries by the Daily News established that Transnet has so far not declared the Gupta interests in the on-going contract negotiations.

NRZ’s corporate communications manager, Nyasha Maravanyika, confirmed that questions about the Guptas’ links have been raised.

“What is important is that a big project recapitalisation of equipment is on the cards. Since negotiations are going on, it’s important not to pre-empt, suppose negotiators are considering those issues. We can only wait. We will be able to tell who is doing what when the deal has been completed.

“I am sure negotiations are going to look at those things and only those, for now, shall know what is going on,” said Maravanyika.

“So for us to predict the Guptas’ role at this stage would be jumping the gun. Let the negotiations conclude first, that’s when the questions concerning the Guptas would be addressed,” he added.

Asked when the deal is likely to be signed, Maravanyika said: “Negotiations are still going on and the deal is to be expected before the end of the year.”

The South African press has been running a series of scandals involving businesses owned by the Guptas, including a locomotive deal in which China South Rail — a State-owned Chinese manufacturer — delivered 359 locomotives to Transnet in a deal worth $1,5 billion.

The deal was allegedly brokered by a Gupta-connected firm, Tequesta.

Investigations commissioned by the South African Parliament found out that the locomotive acquisition deal included a five billion rand kickback for Tequesta.

The investigation also established that German software giant SAP, paid a 10 percent “sales commission” to T-Systems, a company controlled by the Guptas, to clinch a 2,5 billion rand deal with Transnet.

The deal was to provide IT systems to South African harbours and rail systems. DailyNews