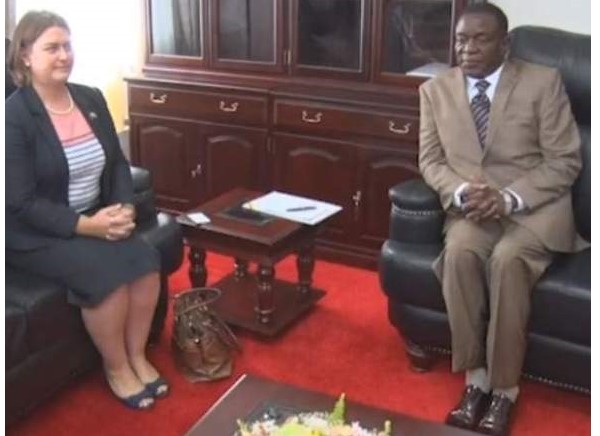 Outgoing Australian Ambassador to Zimbabwe, Suzanne McCourt has applauded the frank discussions and positive vibes that are evident in engagements with the new government, saying the stance can lead to a broader shift in the Australian government’s policy regarding the two nations’ relations.

Ambassador McCourt, who has served as Australia’s top diplomat to Zimbabwe, Zambia, Malawi and the DRC since 2015, paid a courtesy call on President Emmerson Mnangagwa this Wednesday morning to bid him farewell. Emerging from the meeting,

Ambassador McCourt expressed optimism of improved relations and cooperation across various sectors between the two countries.

She said government to government relations have not always been smooth sailing but the coming in of a new dispensation and the promise of improvements in economic policies should see more Australian companies coming to invest in Zimbabwe.

“I am encouraged by the frank discussions I had with President Mnangagwa, he is so open-minded and I am optimistic that bi-lateral relations will now turn for the better,” Ambassador McCourt said.

Since the turn of the millennium, Zimbabwe and Australia have had low profile relations.

Australian mining companies are spread throughout the African continent but their presence in Zimbabwe has been quite low but from discussions held with the President, more cooperation is indicated, says the ambassador.

Zimbabwe was the first ambassadorial posting for the Australian diplomat who previously worked as a foreign affairs official in East Timor and the Netherlands.

Ambassador McCourt said she will be returning back to Australia at the end of the month after a fruitful three year tour of duty in Zimbabwe.