Economic Freedom Fighters (EFF), Julius Malema’s party, has torched a storm by sensationally claiming that Zimbabwe would have become a great nation even if Grace Mugabe had taken over from her husband.

This was met with backlash from Zimbabweans and South Africans.

Grace Mugabe was reportedly tipped to take over from her husband who had ruled the nation for 37 years since the once breadbasket of Africa gained its independence from Britain in 1980.

“Zimbabwe is going to be great again; Mugabe had to leave because a good dancer knows when to leave the stage. “Even if Grace took over it was still going to be good,” said EFF via a tweet on its verified Twitter account.

Fadzayi Mahere, an aspiring parliamentary candidate for Mt Pleasant constituency in Harare, said: “Grace would have been awful for Zimbabwe.”

“Bob didn’t know when to leave the dance floor. He forced himself on us well beyond his use-by date. Thank God he’s gone and thank God Grace is no longer in charge of Zim,” she added.

Another Twitter user, Morgen Chokwenda, said: “NOOOOOOOO. Juju, you have no idea what you’re talking about. Grace was good for nothing, for noone. Sometimes it’s good to be quiet if you have nothing to say…they say silence is golden!” 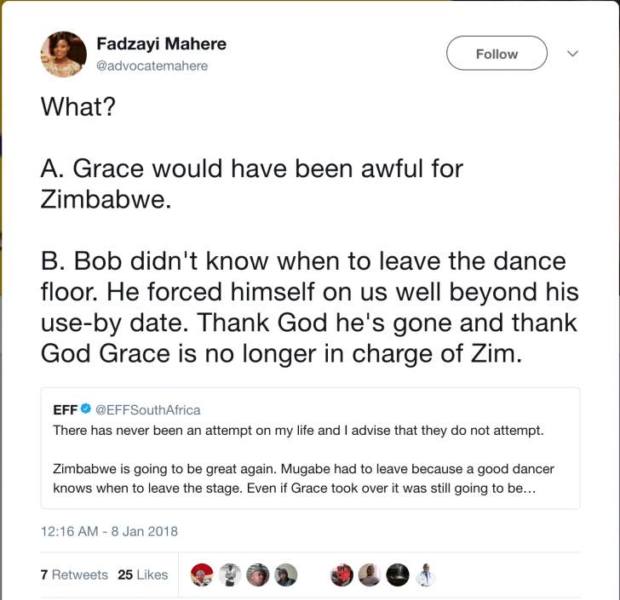 Malema used to be a staunch supporter of former President Mugabe as their economic ideology of economic empowerment were in sync.

He, however, chided Mugabe for staying too long in power. President Mugabe was removed from power after the Zimbabwean army launched operation Restore Legacy which has since seen many Zanu PF politicians in the G40 cabal arrested. – Takudzwa Chiwara