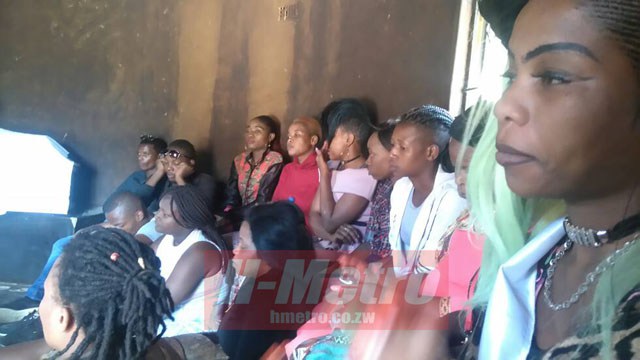 THERE was real life drama in Seke communal lands when se_x workers stole the show at the burial of a fellow ‘thigh’ vendor who succumbed to cervical cancer.

Men believed to be the late Plaxedis “Nadia” Mashumba’s se_x clients and fellow se_x workers mimicked the late ‘thigh’ vendor’s antics as they laid her to rest.

Female and male co_ndoms and tissue paper were also thrown in her grave while some splashed both opaque and clear beer on her coffin.

Some belted into song gyrating to the traditional drums while others wept uncontrollably during the procession.

The self-confessed hookers mimicked the deceased’s antics before her burial and mourners jostled to catch the glimpse of the drama with some taking turns to record videos.

So ‘refreshing’ was the drama as one of Nadia’s close friends in body-hugging dress exposing her asserts and curves stole the show while imbibing a quart of Black Label beer which happened to be the late hooker’s favourite.

And more drama occurred at the homestead as relatives and villagers disassociated themselves with Nadia who had long forgotten her roots.

It, however, took a taxi driver – Madzibaba Itai Chikosha – who used to give Nadia transport for errands, to intervene and lead burial proceedings after the Harare contingent reached a stalemate with her relatives.

“When we arrived in Seke communal lands, the situation was tense as relatives were not willing to accord her a decent burial.

“We discovered that she had long lost contact with them and she was no longer visiting them as she concentrated on her job as a se_x worker before she succumbed to cervical cancer early this week.

“She was well known in all pubs in the capital for being flamboyant, classy and of course looking down upon fellow p_rostitutes she competed with for clients, especially at City Sports Bar and Holly’s Hotel where she was popular with clients,” said the source.