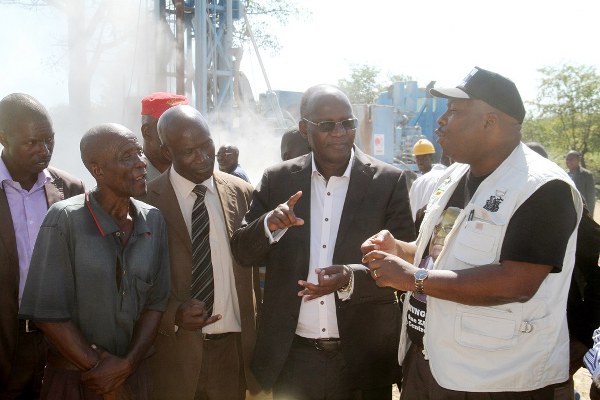 Zimbabwe’s Robert Mugabe was sacked as president illegally and the international community must help remove the “military government” that has taken power or risk the country descending into chaos, an exiled Mugabe loyalist said on Friday.

Mugabe, 93, stood down last November, a week after the army and his former political allies turned against him, ending nearly four decades of rule marred by allegations of corruption, human rights abuses and economic negligence.

His former vice president, Emmerson Mnangagwa, 75, whose sacking prompted the military takeover that forced Mugabe out, was sworn in as president and the general who led the de facto coup, Constantino Chiwenga, was installed as his deputy.

Mugabe’s resignation came in the form of a written statement and he has not spoken since.

“The president was alleged to have resigned. There is no evidence,” Jonathan Moyo, a cabinet minister under Mugabe, told Reuters by phone from an undisclosed location, in one of the first detailed accounts from a Mugabe supporter since the coup.

“It is completely unsustainable for anyone to say Mugabe resigned voluntarily when we know the army took over all institutions of the state and confined him to his residence. You have to be applying a Banana Republic model to say he resigned.”

Moyo was the fiercely combative mouthpiece for a faction in the ruling ZANU-PF party that opposed Mnangagwa and backed Mugabe’s 52-year old wife, Grace, to succeed him.

Mugabe’s departure brought tens of thousands of jubilant Zimbabweans onto the streets and was widely cheered by leaders in Africa and the West.

But Moyo said the international community, including the African Union and the United Nations, was making a huge mistake if it legitimised a government that came to power via a coup.

“This is a military government. You cannot send the arsonists to be the fire brigade,” he said.

He said the public was currently living in unprecedented fear of the former soldiers who have taken political office but eventually the masses would not stand for an “illegal regime”.

“If you don’t intervene when there has been such an outrageous, brazen attack on a constitutional order, you are simply opening the floodgates to conflict,” he said.

“If they don’t act, just as the sun will rise tomorrow, Zimbabwe will be another Somalia. There will be bloodshed.”

Government officials could not immediately be reached for comment. But in response to earlier criticisms levelled by Moyo, government spokesman George Charamba said on Thursday the issue of legitimacy or illegitimacy did not arise.

He pointed to large demonstrations in November calling for Mugabe’s departure and “across the political spectrum support” for his replacement by a new administration.

“So really this is a bitter, bitter defeated politician,” Charamba said.

Many of Mugabe’s political allies were either arrested by the military in a series of spectacular raids in the early hours of Nov. 15 or they fled into neighbouring countries.

Moyo said he narrowly escaped with his life.

“This was not Mickey Mouse stuff. There was heavy gunfire for 15 minutes. They shot stun grenades in the house. I was there with my wife and children,” Moyo said, adding that he has since fled to another country over fears for his safety.

“They still have aspirations to harm me.”

Grace Mugabe’s accelerating presidential ambitions contributed to Mnangagwa and the military taking action to prevent her taking over from her ailing husband.

Moyo, a figure reviled in much of Zimbabwe for his often brutal verbal assaults on detractors, says he has no regrets.

“I will never, ever accept the proposition that those who use violence have outsmarted me,” he said.

“I would rather be hated for standing for my principles and believing in the rule of law than be feared that if people don’t agree with me I will unleash the tanks.”