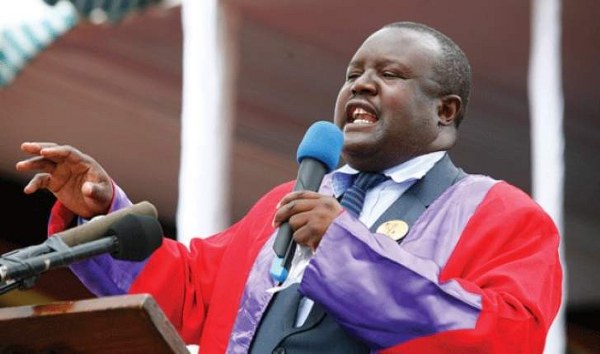 TRADITIONAL leaders have unanimously embraced the new political administration led by President Mnangagwa and as custodians of the land gave the leader all blessings to steer Zimbabwe towards prosperity.

This was said by President of the Chiefs Council Chief Fortune Charumbira yesterday at the close of a two-day Chief’s Indaba at the Zanu-PF Convention Centre here, which saw President Mnangagwa formally meet the traditional leaders since his inauguration on 24 November last year.

The meeting was planned as one of the first port of call by the President and Commander-in-Chief of the Zimbabwe Defence Forces to interact with the chiefs and hear issues affecting them in the effective discharge of their duties in their areas of jurisdiction.

Chief Charumbira reiterated that the traditional leaders and Zanu-PF were inseparable.

The leader was quick to mention that Chiefs had no qualms with former President Robert Mugabe and stood steadfast in supporting any leader chosen by the ruling party.

“This meeting is the first with our President and his leadership following the popular Operation Restore Legacy that ushered in a new dispensation,” he said.

“It is an honour in this country to be respected by the President. He (President Mnangagwa) has said let me start by meeting the chiefs and we are happy he has bestowed us such an honour.

“Last night (Last Friday), we met as chiefs from all parts of the country and said we want to embrace your (President Mnangagwa’s) presidency and your team of Vice-Presidents (Retired Zimbabwe Defence Forces Commander General Constantino Chiwenga and Cde Kembo Mohadi).

“We have accepted all the work that you did until your appointment. Please conduct your duties in peace and with the assurance that as chiefs and custodians of the land we have unanimously embraced you and your team.

“You have our blessings and we are very confident that you will take this nation forward.”

Chief Charumbira said chiefs had been deeply concerned with the goings on in Zanu-PF that was threatening to destroy the party ahead of elections this year.

He said it had become evident that there was a need for intervention in the political goings on in the country and the ascendance of President Mnangagwa to Presidency was not a coincidence, but had been foreseen as the best way for the country.

Chief Charumbira said President Mnangagwa had been sworn into office as dictated by the national Constitution, but there were some traditional rites that go with the office that needed to be performed by the chiefs.

“You have been bestowed through the constitutional way which is Western,” he said.

“We as custodians of the land have accepted you and need to perform certain rites that include giving you a walking stick made from one of our traditional trees, a spear, animal hides and other ornaments we cannot publicise.”

Chief Charumbira said it was pleasing to note that the Government respected chiefs by restoring their powers.

“Let me say that we were stripped of our powers by the whites around 1898 as the settlers displaced us from our resources,” he said.

“Laws that targeted the so-called natives were created around that time with the chiefs being the major targets as they had power to rally the masses against the settlers.

“But we kept on the struggle to free ourselves which culminated in the independence in 1980 and again through Operation Restore Legacy, we have been given more power.”

Chief Charumbira said traditional leaders were confident President Mnangagwa would address issues affecting them as he had demonstrated high regard for chiefs by advocating a Constitution that increased the number of traditional leaders in Parliament from 10 to 20.

Traditional leaders said Government needed to address issues such as cash shortages, allocation of vehicles to discharge their duties, rehabilitation of rural roads, human-animal conflicts and access of the general populace to proceeds from the country’s resources.

Speaking at the same occasion, Minister of State for Midlands Provincial Affairs Owen Ncube took the opportunity to congratulate President Mnangagwa on behalf of the Midlands Province.

The closing of the indaba was also attended by Cabinet ministers, senior Government officials and members of the uniformed forces.