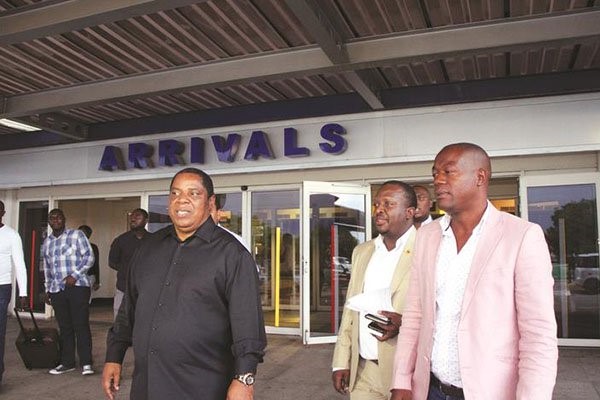 The visit follows a meeting he held with President Mnangagwa on December 21 last year in Pretoria, South Africa.

Mr Gumede — who is the founder and executive chairman of Guma Group — is an award-winning businessman and entrepreneur who is also the current co-chair of the SA-Russia Business Council, and was co-chair of the Brics Business Forum in China in 2011.

He is also a member of the African China Trade and Infrastructure Development Forum with global experience in infrastructure development.

In an interview on arrival at Robert Gabriel Mugabe International Airport yesterday, Mr Gumede said he was optimistic about investing here under the new political dispensation owing to conducive policies pitched by President Mnangagwa.

“I am happy to be here in Zimbabwe just to see what one can do in assisting Government in achieving its short-term goals of turning around the economy of the country. As an entrepreneur and businessman who is involved various businesses, I felt it was an opportune time to come into your country and identify some of the opportunities that my company will be able to invest in,” he said.

He said he was already an investor in the country in the tourism sector. Mr Gumede, a Precondo investor, said he wanted to invest more, especially in infrastructure and ICT.

“For me Zimbabwe offers a great opportunity and Zimbabwe used to be the basket of Africa. I believe good times are back and I didn’t want to wait, especially when I am in South Africa as a neighbour,” he said.

He said if Zimbabwe and South Africa combined their strengths, they could do so much together and that Africans should help each other.

“I want to partner with local Zimbabweans in various sectors of the economy where we will work together. What will stop Zimbabweans from investing in South Africa? Nothing!” he said.

He said Zimbabwe had the most intelligent and hardworking people.

“Guma is not new to Zimbabwe. We have investments in Victoria Falls where we have two lodges and we are also operating helicopters in Victoria Falls. At the moment, looking at the projects we have targeted based on our research, we are looking in the region of $1,2 billion to invest in the country,” he said.

“It is the responsibility of every patriotic Zimbabwean to do whatever they can, in their respective fields to help revive the economy,” he said.

He told South Africans and the Zimbabwe Diaspora of immense business opportunities in the country, and that Zimbabwe was open for investment.

2 ZRP officers in serious trouble after receiving US$16 bribe

News Muza Mpofu - 16 August 2021 0
A duo of police officers was dragged to court over the weekend charged with criminal abuse of duty after it reportedly received US$16 bribe. The...

Zimbabwean bhinya gets 12 years in jail after raping a school girl in bush...

News Muza Mpofu - 16 August 2021 0
A 29-year-old Zimbabwean man who attacked and repeatedly rap_ed for three hours a Swaneng Hill schoolgirl in Serowe, Botswana, has been sentenced to 12...

News Nelson Bhebhe - 16 August 2021 0
Zaka District school heads have said they are ready for opening schools as they will just need a week or two to finalize preparations...

News Cynthia Goba - 16 August 2021 0
A motorcyclist had a narrow escape as he was crossing the runway of an airport in the Democratic Republic of Congo when a plane...

News Cynthia Goba - 16 August 2021 0
AT 47, Norest Kubaya (not her real name, she requested to use another name because her husband did not grant her permission to speak),...

That teacher is very evil: Parents breathe fire after hearing what a teacher did...

News Muza Mpofu - 16 August 2021 0
THAT TEACHER is evil, said people who heard what the teacher did to the grade R pupil. She allegedly chased the boy home for wearing...

Jesus Christ is Lord, this is serious: Man shocked after seeing a small boy...