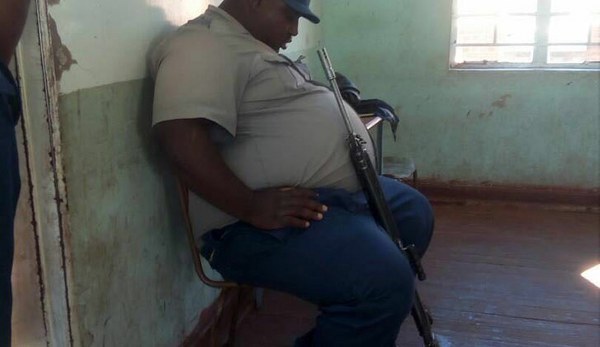 As President Mnangagwa has promised a zero-tolerance on corruption, there is total unrest in Zimbabwe’s police force after a financial scandal running into millions of dollars erupted within the Zimbabwe Republic Police (ZRP), prompting President Mnangagwa’s government to carry out nationwide audits into police affairs. This was after it was exposed that some senior commanders of the force had directed unsanctioned salary deductions, among other irregularities.

This comes amid a massive shake-up within the police that will claim the scalps of several senior police officers, including deputy commissioners-general, commissioners, senior assistant commissioners and assistant commissioners. Senior officers, among them, Commissioner Grace Nomsa Ndebele and senior police commissioners, Erasmus Makodza, Justice Chengeta, Eve Mlilo and George Manyonga this week received retirement letters from Acting Commissioner-General Godwin Matanga, creating unease among remaining senior officers who do not know their fate. Senior officers were raising over US$5 million per month from the illegal deductions, it has been established. The country’s 40 000-strong police force will soon carry out the probe across the nation’s 10 provinces to establish the nature of the financial prejudice caused by the illegal deductions.

The unsanctioned fees and levies were a big strain on junior police officers who earn an average monthly gross salary of US$470, including allowances. Each member of the ZRP would be charged US$5 per month for the recreational fund, US$10 for Kuyedza Club and US$1 for the funeral fund.

Police sources said failure to pay the funds would result in affected members being denied the right to go on leave, adding that officers were expected to contribute up to US$30 towards various funds every month. Until recently, the cops were expected to pay the contributions using cash at their respective stations.

The unsanctioned levies included that of Kuyedza Club, which was overseen by Isabel Chihuri, the wife of the recently retired police commissioner-general Augustine Chihuri.

While Kuyedza Club aims to empower policewomen and spouses of police officers, all members of the force were being forced to contribute regardless they were members or not.

The probe comes at a time the ZRP is carrying out a lifestyle audit on its members, amid concerns that some officers were engaged in corrupt activities. The ZRP collects about US$60 million a year in spot fines.

According to an internal memo seen by the Zimbabwe Independent, the ZRP will stop all direct deductions from its members and allow the Salary Services Bureau (SSB) to effect contributions on sanctioned levies.

“It has been observed by this headquarters that some commanders continue to effect some unsanctioned deductions from members, which are not provided for by the Police Standing Orders. For ease of reference, deductions sanctioned include ZRP Association, The Outpost etc. Unsanctioned deductions include funeral funds, developmental funds, fuel funds etc,” reads an internal memo sent by Commissioner (operations) Meki Tanyanyiwa dated January 17.

“Kuyedza Club membership is voluntary in terms of paragraph 29.5 and 29.6 of the Police Standing Orders. It should be borne in mind that the meagre salaries of members cannot be used to sustain government obligations. Director finance will soon be directed to carry out audits at all provincial, district and station levels. Disciplinary action will be taken against errant commanders. All sanctioned deductions should be effected through SSB after the necessary procedures are followed.”

The Independent has also established that investigators are already gathering information for the probe, although some members feel the audit should be conducted by an independent firm.

The shake-up, which is gathering momentum, is expected to reduce the number of senior police officers amid concerns that the force was top heavy.

Police sources told the Independent that up to 30 senior police officers had received similar letters.

Government is also contemplating abolishing the commissioner’s posts and reducing the number of DCGs to two.

Police spokesperson Charity Charamba could not be reached for comment.

Last year, three spouses of top ZRP officials were accused of forming a private company, which they allegedly used to siphon money from the force’s Kuyedza Women’s Club.

This emerged after the then suspended Assistant Commissioner Fortunate Chirara appeared at the Harare Magistrates’ Court on a charge of stealing US$500 from the club’s coffers.

Chirara told the court that the US$500, which she was alleged to have stolen, was actually withdrawn on Isabel’s orders to facilitate the registration of Marblegold Enterprise. She further revealed that Isabel and Miriam were directors, while Clara was the secretary of the company in which they were all shareholders.

Chirara, who was in charge of the Kuyedza Women’s Club administration, also revealed she would receive instructions from senior police members’ wives on various procurement orders.

Chirara and Inspector John Madhuku, were later sentenced to two-year prison terms each last October for stealing
US$4 000 from the ZRP’s Kuyedza Women’s Club.