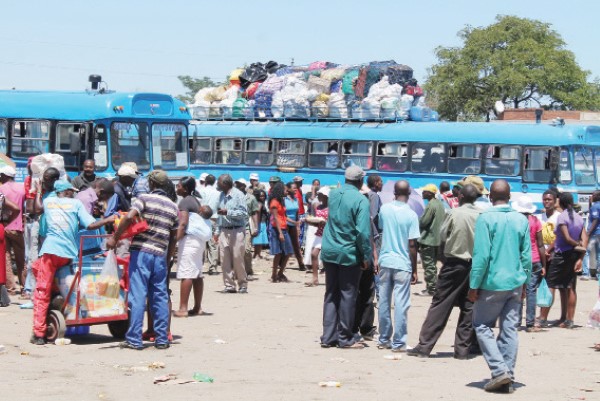 A BUS crew from Bulawayo has been arrested after it allegedly kidnapped and beat up a rival company’s team before damaging the bus in a fight over passengers.

The drama saw passengers being stranded for some hours in a Maplanka Bus Service vehicle after the driver and conductor had been kidnapped by rival Nice Guy Bus Service crew on January 8.

According to court papers, the hostility between the two competing companies reached boiling point on January 7 when the two sides clashed in Lusulu, Binga, at night where some pepper spray was allegedly used on passengers as the crews fought.

Both companies are fighting to control the Bulawayo-Lusulu route and the fights have been going on in Bulawayo and along the road.

In retaliation after being defeated in Lusulu, Nice Guy Bus members allegedly called for reinforcement from their Bulawayo office and intercepted a Bulawayo bound Maplanka Bus near St Lukes in Lupane on 8 January.

Armed with an iron rod, hoe handles and an axe, crew members from Nice Guy who were driving in a Toyota Quantum, blocked the bus before ordering the driver, Mr Task Sibanda and Mr Thabisani Nyoni out of the bus and took them away. The two are the complainants.

They were remanded in custody to today and the magistrate advised them to apply for bail at the High Court given the gravity of the charges they are facing.

“On January 7 at 9pm while at Lusulu in Binga, there was a misunderstanding between the two bus companies’ crews over passengers. A Nice Guy Bus driver (Ntuthuko Ndlovu) was beaten up by passengers and he phoned their Bulawayo office to report the incident,” said Mr Sibanda.

He said the accused intercepted the Maplanka Bus crew near St Lukes the following day at 1pm.

“The following day at 1pm, a Toyota Quantum driven by Xolani Tshuma and carrying the accused persons intercepted the bus at St Luke’s and suddenly stopped in the middle of the road in front of a Maplanka Bus. Mr Nyoni who was driving the bus stopped to avoid a collision as the road had been blocked,” said the prosecutor.

“The accused disembarked from the Quantum and approached Mr Nyoni who they accused of assaulting their colleague in Lusulu.

“They forcibly opened the driver’s door and pulled him out before dragging him together with the conductor, Mr Sibanda, to their vehicle while assaulting them in the process.”

“The accused drove for about 28km in the Victoria Falls direction before being intercepted by police who had been informed of the skirmishes,” said the prosecutor.

The police arrested the accused and rescued Messrs Nyoni and Sibanda who later returned to the stranded passengers and proceeded with the journey.

An iron rod, hoe handles and axe were recovered from the attack vehicle.

Two other cases are pending, one in Bulawayo where Mr Sibanda was allegedly stabbed nine times with a screw driver at Entumbane Bus terminus and another one in Lusulu where the Maplanka crew members are the accused.