RAPPER, Tytan, last night confessed his lover Olinda Chapel’s drama which saw her threatening to go live on social media to expose his alleged illicit affair as an attempt to trick followers.

The Mukoko singer said the drama was ‘well-calculated’ to hype his forthcoming tour of Australia alongside comedienne Tyra “Madam Boss” Chikocho in March.

The two acts are set to take part in the Black Tie Dinner Gala on March 17, courtesy of Ebenezer Charity Foundation.

In an interview with H-Metro, Tytan said he was still in good books with Olinda.

“Titori bho. (We are okay,” said Tytan who said he had no regrets for yesterday’s drama which was greeted with mixed fortunes by social media users.

He also confirmed that the ‘well-planned’ drama worked in their favour.

“It was banter and those who know us well vanoziva kuti ndomatambiro edu.

“I’m actually the one who started it when I posted that I will make a date with Tyra Chikocho in Australia and people should not tell Olinda about the ‘date’’.

“In return, Olinda had to make the response threatening to expose my affair with another girl and it really worked for us,” said the youthful musician.

Tytan said he was pleased by the response they got adding from the social media adding that the stunt worked in their favour.

“We don’t mind what people will say and those who believe in me will continue to support me.

“This kind of banter is common with celebrities and in our case we are happy because we have achieved what we wanted by that post,” he added. 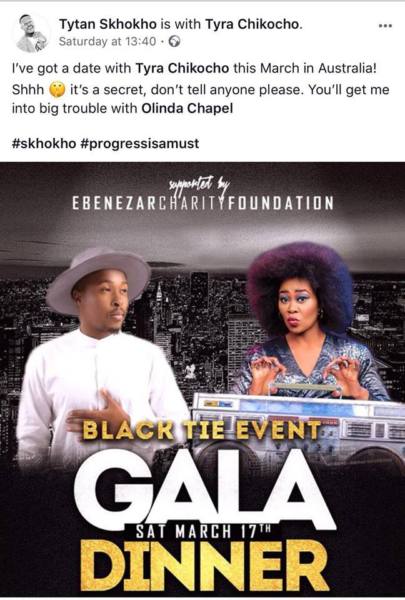 Yesterday before lunch time, social media users were taken by surprise as Olinda she threatened to expose Tytan’s shenanigans like she did with Stunner during the same time of the year last year.

So complicated was the 2017 drama as social media users initially sympathised with Olinda, blaming Stunner for his shenanigans.

As the drama unfolded, it dawned to many that Olinda was an attention-seeking woman who later moved in with Tytan.

Tytan said there was more ‘drama’ to come as the year unfolds.

Music wise, he said he was working on a number of videos and singles due for releases before the second half of the year.

Meanwhile, critics and fellow artistes who preferred anonymity had no kind words for Tytan as they feel he is misled by the Olinda.

Others feel Tytan has the potential to do well without cheat publicity stunts to hype forthcoming events or projects.