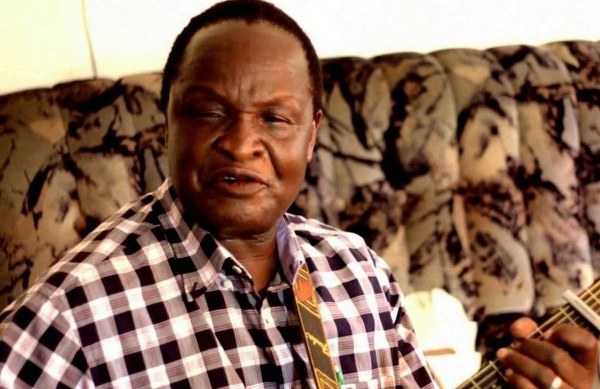 IT’S a Friday around mid-morning when the unassuming and usually jovial Baba Machanic Manyeruke welcomes us at his Zengeza 1 residence in Chitungwiza.

As we enter his crammed and yet trophy-laden sitting room, an American researcher who flew all the way from overseas to compile his documentary, is busy fixing cameras and lights in the lounge.

Suddenly, the gospel supremo who appears to have been caught unaware, briefly consults his wife on whether to attend the American visitor or H-Metro crew first as our photo-journalist Arron Nyamayaro gets busy to business as well.

After consulting the American researcher and of course his wife, The Puritans founder opts to entertain us first, albeit in his store room (or is it rehearsals room) where he keeps musical instruments and printed CDs.

“You were lucky because we were about to shoot a documentary with James who flew all the way from America to shoot my documentary,” says the granddaddy of Zim gospel music accompanied by his wife Hellenah.

• BUILDING PROJECT
Baba Manyeruke, who turns 76 on August 16 this year, says he spent the greater part of last year shuttling between Chitungwiza and his rural home.

“The year 2017 was indeed one of the most difficult years in my living memory; I spent the greater part of the year ndichigadzira pekugara at my rural home.

“I spent a fortune building my rural home in Chiundura (communal lands) in Village 4 Masvovi where I am building my three-bedroomed house which has a shape of a hexagon.

“So far, I have spent close to $4000 building the house and I think it will be finished in June this year.

“I think this will be one of my biggest achievements in the family since I will own a decent place where you call home.

“Of course I own this house in Chitungwiza but I feel there is need to have a decent home in the rural areas since we are buried there when we die.

• FARMING PROJECT
Despite his love for gospel music and busy schedule performing in church conferences, Baba Manyeruke is also a farmer.

“My son, I own 16 acres of land and so far only eight acres are being fully utilised. I also own a herd of 16 cattle and it is my hope that one day I will relocate to my rural home and live there peacefully.

“As you can see, I am still ageing even though I might look younger than my real age. I was born in 1942 and you can make your calculations and ascertain my age.”

During the same interview, Baba Manyeruke also clears the air on his relationship with son Guspy Warrior widely believed to be ‘rocky’.

“A lot has been said regarding my relationship with Gupsy Warrior and the truth is that we are getting well along.

“I don’t have a problem with him pursuing Zim dancehall because that’s where his calling is.

“We are both playing our part as musicians in the industry and we will continue doing our best,” says the singer.

Quizzed on the career path he wished his son Guspy Warrior to follow, Baba Manyeruke opens up.

“To be honest, I wanted him to be either a teacher or someone who works in high offices.

“Given my background as a gardener before I became a waiter, I did my best in educating all my kids and it was also my wish to see Guspy Warrior achishandawo mabasa anosungwa tie.

“In my case, I did menial jobs but I don’t blame anyone for failing to send me to school since I had siblings who wanted to be looked after, ndaicheka hedge yevarungu zvekuti dhu as a garden boy then.

“However, I could not stand on his way after he made up his mind and I think he is pursuing the career path he loved most.”

• FALSE PROMISES
Baba Manyeruke says he is bitter since he has become a victim of false promises.

“I am not a cry baby as some people would want to put it across but I have been short-changed on many occasions.

“I have been promised cars and even houses by some popular prophets (names withheld) who never owned up.

“A few years back, there was a promoter (Shepherd Sirewu) who once promised me a Jaguar vehicle which I never asked for.

“He called me and told me of the gift and I had to test drive the car from Premier Auto to OK Marimba along Samora Machel Avenue.

“I had a photo shoot standing besides the car at Sheraton (Rainbow Towers) but I never got it afterwards,” he says.

Baba Manyuruke says he has forgiven the promoter but was hurt after being used by the businessman.

“It appears tsoro dzake hadzina kuzobuda zvakanaka but I never begged for the car and I was only hurt after he used my name for his own benefit.

“Initially, I had advised him to buy me a simple truck for my errands but he insisted that I accept the Jaguar, which never came my way.”

Baba Manyeruke says educating his children and of course looking after his family remains one of his major achievements.

“Like I said earlier on, I have managed to send all my children to better schools and I have also married this beautiful wife who has been there for me over the years.

“I have also managed to build this house through my earnings and of course the name which I built over the years.

“I keep on praising the Lord for giving me this talent and it is my hope that I will pass this talent to new generations to come.”

• SATANISM RUMOURS
Like any other top entertainer of his peak, Baba Manyeruke says he is also a victim of false rumours.

At the height of his career around the 1990s when he was on top of his game, rumour had it that he had joined Satanism, a claim he vehemently dismissed as hogwash.

However, he concedes it was not easy for him to convince people as the rumour had spread like veld fire.

“It (Satanism rumours) really affected me as a person since I had to convince people that I wasn’t into Satanism.

“Pastors would come here to give me strength and support and I only managed to get over it due to their support.

“Up to now, I don’t even know who started the rumour or the motive behind all those claims.

“During the same period, my music was pulled off air on some radio stations and I believe some DJs had an agenda to push certain artistes.

“But as they say, you can never put a good man down and we are still in the game doing our best and people now know the truth.”

He also suspects that the rumour might have been spread by some of the people in churches where he used to sing.

“In life, there are some people who believe that it’s easy to destroy someone by creating such damaging rumours.”

• FITNESS
Despite his age, Baba Manyeruke exudes energy and confidence each time he takes to the stage.

And what could be his secret which has kept him as fit as a fiddle?

“I am very particular about my fitness and I have a lot of medals here as an athlete. I used to take part in long distance athletics competitions as a runner.

“At the moment, I sometime take a walk in the neighbourhood or jog just to keep myself fit. I also eat health food and my wife who is here can testify.

“She is the one who has been monitoring my diet and I just want to thank her for all she does for me.

“She knows what I want, especially African delicacies which are highly nutritious,” he says.

• WANING APPEAL
On the waning fortunes and loss of appeal for gospel music, Baba Manyeruke blames it on the influx of artistes in this genre.

“When we started along with the like of Jordan Chataika, gospel music was rewarding because it was more of a ministry than commercial.

“Of course I am not against the influx of gospel artistes but all the problems started when hundreds of artistes joined the genre for commercial purposes.

“Gospel has since lost its appeal as people are now skeptical on whether we are singing for money or to worship the Lord as we all want to claim to be doing.”

• PIRACY
On parting shot, Baba Manyeruke was optimistic the genre can still hold its own despite piracy which has rendered artistes poor.

“It’s hard not to mention piracy as one of the major setbacks we suffered. It’s no doubt that pirates are earning more than the composer and we urge the powers that be to act swiftly and resolve the issue,” says the singer.