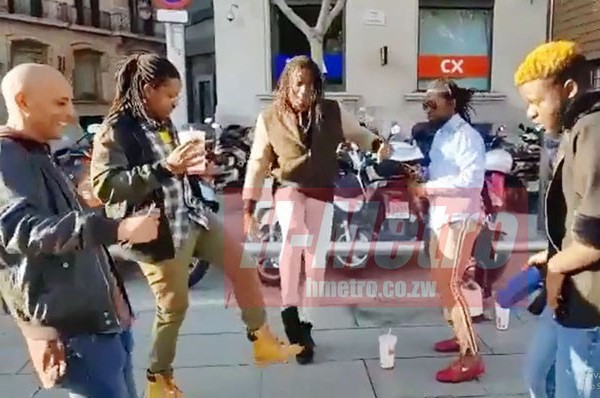 JAH PRAYZAH this week hit the jackpot as he recorded a duet with Jamaican ‘golden-voiced singer’ Jah Cure –otherwise known as Siccature Alcock -in Barcelona, Spain.

Apart from audio version of the track titled “Angel –lo”, the two dreadlocked artistes also shot an accompanying video and the plan is to drop them on Valentine’s Day.

Last year Jah Prayzah teamed up with South African pop duo, Mafikizolo, for a Valentine’s Day track, Sendekera whose video had 2, 657 million views on You Tube as of yesterday.

Speaking EXCLUSIVELY to H-Metro from Barcelona yesterday, Jah Prayzah said he was overwhelmed by events in Spain as he got to work in studio with the world’s most sought-after Lovers rock, Roots reggae and reggae star.

“I engaged Jah Cure and we agreed on a duet last month. We then met in Spain this week to do the song and also shoot the video, which we intend to release on February 14.

“The song is called Angel-lo, a love song, and we performed it in Shona and English. We fused bits of mbira and saxophone to retain my identity. We also managed to get a Spaniard to play the Spanish guitar just to exploit our presence in that country.”

Jah Prayzah added that the 39-year-old Jah Cure was easy to work with despite his global popularity.

“Jah Cure is a simple guy, easy to work with. Everything was flowing smoothly and it was an enjoyable experience. I travelled with DJ Tamuka as he is the producer of the song.”

Now plans are to stage a show with Jah Cure in Harare to celebrate the duet.

As he thrives to conquer the world, Jah Prayzah has also roped in South African-based Zimbabwean public relations consultant, Shaleen Manhire-Nullens to handle his international affairs.

Shaleen was also in Barcelona having played a key role in getting Jah Prayzah and Jah Cure to do the duet.

“We are now working together, she played a key role in the Jah Cure project and a lot is in store as we forge ahead. It promises to be exciting.”