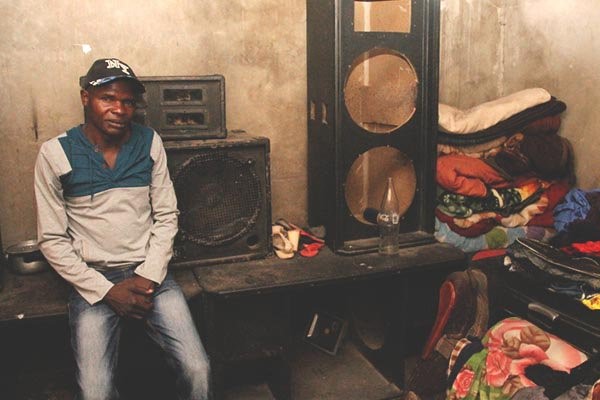 As the pre_gnant clouds give birth to a heavy downpour, this news crew is prompted to scurry for cover and instead of being ushered into the house by our host, the singer opts for an interview in a ramshackle car which we gladly share with rats that have taken advantage of the comforts of the seats to breed.

We are at musician’s Freddy “Kapfupi” Manjalima’s homestead! The rains continue to pour, joyfully absorbed by the sun-baked surface, giving a new lease of life to the crops which have started to wilt. In a moment of irony, Kapfupi cast his eyes through the car window and mumbled, “. . . hope the rains will bring fortunes and blessings.”

The singer really needs a fresh breath of blessings and fortunes as his fame and popularity have waned over the years. What is left from the nine cars he used to have are just two ramshackle vehicles — Mercedes Benz and Nissan Basara parked at his house in Epworth which he is struggling to put finishing touches on.

“We can’t have the interview in the house because it is too dark. There is no electricity,” said Kapfupi as he adjusts car seats for this news crew to sit on.

His wife Precious “Mai Nga” Kabrito was not in sight.

“Mai Nga has gone to work. I heard people saying my wife has ditched me but the truth of the matter is that we are still together,” Kapfupi said immediately pouring cold water to the main reason of our visit.

The musician who has visibly lost weight was clutching a bottle of his favourite beer and remains “satisfied” about his achievements in life.

“I do not want to complain to God. By Epworth standards I am okay. Even if you get into my house, you will find that my children are still eating spaghetti and drinking orange crush. As you can see I am enjoying ice-cold beer in the morning,” he convincingly said pointing to his house which hardly has wind vanes.

However, facts on the ground showed that the man who lives out of cracking the ribs of the nation is a pale shadow of himself.

“I am currently in the process of assembling modern instruments and my band will soon be the talk of the town,” he said.

While Kapfupi claims that he is in the process of assembling state of the art instruments, a peep into his house showed that the only instruments he has are worn out speakers. The man who gave the nation the hit song “Mai Nga” — a shortened version of “Mai Ngaakudzwe” — remains hopeful that his musical train has not halted but just slowed down.

“I am working on a music album and I am going to release a new drama titled “Bvisa Chigunwe Mukanwa” on February 15”. My music is not appreciated in town that is why I am now performing in farming and mining areas. I am a nyau dancer so my companions in those areas understand my music,” said Kapfupi who is proud to be at he is part of the secret society of Chewa culture.

Kapfupi, who by now was relaxed after he initially mistook this news crew for police officers (he refused to say why he is afraid of the police) gave a glimpse of how he manages his band in the process giving credence to the fact that he is temperamental.

“People know Kapfupi as a hilarious character but those close to me can attest that I am a serious person when it comes to work. If band members misbehave on our way to perform, I simply drop them and I will fulfil the show with a drama,” he said without hesitating.

Kapfupi said his former friend Charles “Marabha” Merisi who made headlines after claiming that the comedian was bewitching him needs “rain surgery”.

“He has nothing compared to me, why would I bewitch him,” he quipped.