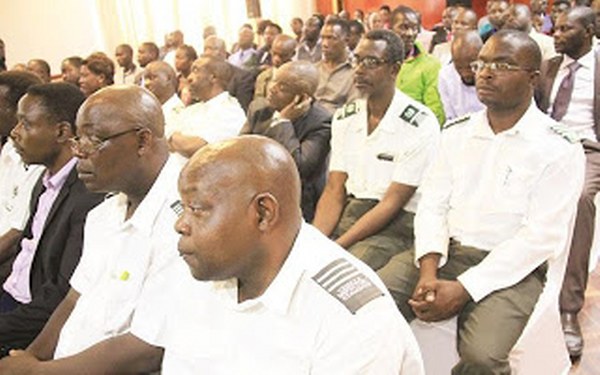 Speaking at a press conference in Harare yesterday, Dr Gumbo said if the VID officials fail to heed Government’s exhortation, senior managers will have to face the chop while the remaining officials risk being rotated on a weekly basis around the country’s various depots.

Dr Gumbo, who said he had in his possession a list of allegedly corrupt VID officials, indicated that he expected VID director Mr Joseph Pedzapasi to deal with corrupt officials, failing which Government would have to act.

“The Zimbabwe driver’s licence is an internationally recognised document. We are a signatory to the 1968 United Nations Convention and that is why one can obtain an International Driving Permit upon production of our driver’s licence.

“My ministry does not tolerate any form of corruption in the issuance of such a valuable document as this damages its reputation. Incompetent drivers have no business on our roads as they are an ingredient to road accidents,” said Dr Gumbo.

He warned driving school owners and their staff — most of whom are believed to be conduits of corrupt activities together with VID driving examiners — that allegations of corruption will be fully investigated and the long arm of the law will catch up with them.

In cases where a driving instructor or assistant instructor has been found guilty, they will be de-registered and handed over to the police, he said.
Driving schools that will be caught on the wrong side of the law will also be closed.

The same warning was extended to VID driving examiners.

The new Government, Dr Gumbo said, has a zero tolerance to corruption.

“We have also heard of VID driving examiners who corruptly issue certificates of competency and even provisional driver’s licences.

“I would like to appeal to the Director Vehicle Inspection Department and all depot managers to inform their staff that in this new dispensation, we will not accept any form of corruption,” said Dr Gumbo.

“What has been disheartening in this episode has been the defensive approach that the top echelons within the VID have chosen to adopt and in the process harbouring criminal behaviour that is prevalent in their depots,” he said.

Government says if the VID top officials fail to act on errant subordinates, then heads will roll.

“Within the context of the 100 days action programme, I would like to see tangible action being taken on errant officers by the director responsible for VID and his depot managers. If nothing happens, we will retire the top officials to demonstrate seriousness,” he said.

The current skewed system, Minister Gumbo said, ensures that “potentially good drivers who cannot afford bribes are not issued with licences”, while “incompetent and half-baked corrupt applicants easily get licences”.

There are also plans to rope the Ministry of Home Affairs to assist in fishing out corrupt officials.

Minister Gumbo jokingly said, “Kana zvanetsa tokumbira ma ‘Gunners’, ndozvisinganetsi.” (If it becomes difficult, we will rope in the army, which is easier).

Similarly, Dr Gumbo sounded a warning to corrupt officials from the Central Vehicle Registry (CVR), a department that is responsible for issuing metal driver’s licences and provisional driver’s licences, saying it is criminal to produce fraudulently acquired documents.

It is believed that Government will make an effort to speed up the processing of the vital documents.

Dr Gumbo also urged the Traffic Safety Council of Zimbabwe (TSCZ) to enforce driving school regulations that were gazetted in Statutory Instrument 309 of 1985.