A KARIBA man is battling for life after his wife scalded him with hot water when the two argued over the wife’s children from a previous marriage.

Devine Chitsiko, an employee at Kariba Heights Primary School, is reportedly nursing severe burns on his face and body at Kariba Hospital after an altercation with his wife Angela Chidare. 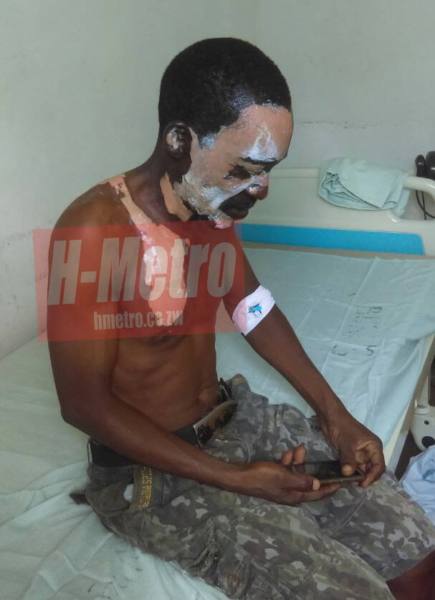 According to a source privy to the fracas, the two had been cohabiting for the past seven months before Chitsiko asked Angela’s three children to move out.

“The two had a heated argument on Saturday night after Chitsiko said he no longer wanted to look after Angela’s three children she sired with another man.

“They recently moved in together and their marriage is barely seven months old, it was their agreement that the children would be taken care of by Chitsiko who is now chasing them away.

“Angela could not stomach that her husband had a change of mind and in an act of fury she poured hot water on her husband while he was asleep,” said the source.

Chitsiko could have suffered further damages if it wasn’t for his neighbours who were quick to intervene.

“I was among the few who helped Chitsiko to get medical attention, we heard screams from their home and we rushed only to find him scalded by hot water,” added another source.

Angela is said to have fled the scene when she saw her neighbours approaching.

“I am in pain my friend, I don’t know why my wife did this to me after all I have done for her and her children.

“I can’t live with someone like this, it’s better she gets arrested,” he said.

Efforts to get hold of Angela were fruitless as reports say she might have fled the resort town.

Meanwhile, another case has been heard at Kariba’s Magistrate Court involving a man who was recently assaulted by a self-confessed s_ex worker for demanding his money back.

The two had agreed for US$3 ‘short time’ before the man Jowel Nzombe is said to have taken longer to eja_culate and was asked to leave by Caroline Chihota.

According to Jowel, he demanded his money back and was thoroughly beaten by a gang of s_ex workers.

He sustained three minor cuts on his head.